I recently started following Brandon Burchard, and am finding his books and podcasts to be a valuable source of inspiration and motivation. He has taught me three questions that I am now asking myself every day. Did I live? Did I love? Did I matter? I find that without some kind of daily self examination, I can drift through life without purpose and intent. My father would frame these questions differently. He would call it “Examining my conscience.” As athletes we might review our daily workout logs, look at our progress charts, do time trials, and check race data. Most everyone has some sort of evaluation system, whether it be personal or professional. Once in a while something happens that causes us to seek deeper meaning from our life experiences.

Tragedy struck this past weekend with the untimely death of someone close to my inner circle. This person fought the demons of depression and addiction for many years. The fight ended for her, but now the impact of her death is rippling through the community of people that knew and loved her. Did she live? Most definitely. Did she love? Yes, she did. Did she matter? Absolutely. So what happened? While we may never know the answer, as I grapple with the aftereffects. I have questions. I feel sadness. I feel anger. I feel compassion. I feel….I don’t know…

I find myself reflecting solidly on the third question: Did I matter? More importantly, I am wondering, did I make you feel like YOU matter? I have always made it a point to try and make someone smile everyday. I can’t remember when I started doing this, but it is a habit that is ingrained in me. Sure, I get some kind of gratification out of it; the recognition that I made someone feel good. But even more so, in these days where negativity rules our world and clogs our social media, our politics, our neighborhoods, and our news sources, I believe it is profoundly important to help people feel valued.

Did I make you feel like you mattered? I sure hope so, because you do matter. A lot.

Everything we do has an impact on the world. It’s been said that we never really appreciate something or someone , until we no longer have it, or them. People aren’t replace-able. EVERYONE has value. That smile you gave a random stranger might have been the only positive thing that happened to them today. When you praised that kid for their off-key flute performance, you might have started them on a life long love of music. When you high five’d the runner as he ran past you at that last race, you might have given them the strength to keep going when they didn’t think they could. When you gave moral support to someone going through a struggle, you might not know that years later, they credit you for keeping them going. That phone call you made to “just check in” with a friend or client might have come at a life saving moment. BE the person that makes those calls. KNOW that what you do in your life matters.

Life is precious. How many times have we heard this before? As cliché as it may sound, it is true. Just ask anyone that has experienced a close call, and they will echo this sentiment. My recent brush with death, (or at least with a world class maiming) happened on July 5, 2013.

Like many people, when the 4th of July Holiday weekend rolled around, I sought the solitude of a good vacation spot, to get away from the rigors of my daily routine. For me, there was no doubt but to head to our “cabin” on the Nehalem River, in Vernonia, Oregon. The weather  promised to be warm, sunny, and beautiful, so we packed our trusted 4 legged companions in the truck (along with everything else we could fit) and headed out to paradise. 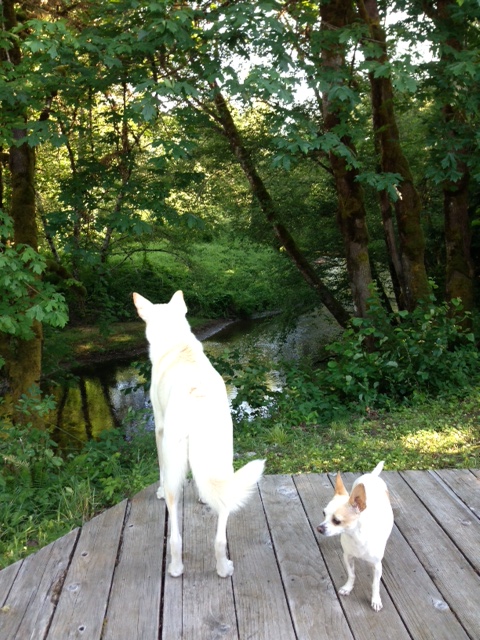 Mid morning on July 5th, Tony and I headed out for a nice training ride on our bicycles, along the Banks-Vernonia State Trail. This is a beautiful 21 mile paved bike path with 13 wooden bridges, lots of hills, trees, streams, and glorious scenery. We warmed up and started riding strong as we approached the planned turn-around point at Hill Top. For the next three or so miles, we flew along at a steady 20 mph pace, having the time of our lives. By now we were 9 miles into our ride, and COOKING! I had just moved into the lead position a mile back, and was in the zone. I’d never ridden this fast for any sustained period before. Well, things changed in a heartbeat. (And could have ended there)

I hit a hole in the asphalt that I didn’t see because we were in a shady area, and I think it was covered with a thin film of moss. My front wheel exploded to the right, and the bike started zig zagging back and forth at an alarming and uncontrollable pace. I quickly realized that there was no way I could regain control and I knew I was going down. I knew that if I went down on this asphalt, there most certainly would NOT be a good outcome. I do not like pain. I especially do not like when my bones are sticking out of my flesh. I took immediate evasive action! 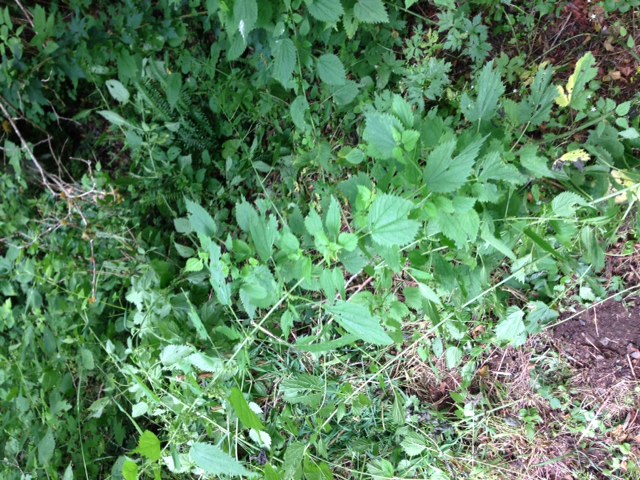 I managed to steer the momentum of my bike toward the outside of the path and onto the softer shoulder, so that when I fell, I would be on a more appealing surface. What I didn’t realize, however, was that the surface contained plants that were covered in thorns, nettles, and every prickly thing you could imagine. PLUS, the thick growth hid the fact that there was a cliff and a ravine under those vines! Like a rag doll, I flew off my bike, into the foliage, and over the ravine. As I was tumbling, hitting my head, and more or less waiting for whatever the outcome was, I heard (aside from my own cursing) a skid, crash, thump, and load moan from my husband. What the HELL???? Why did HE fall?

Upon hearing his crash, I jumped up to get to him and see if he was alright. Of course, I forgot that I had just careened head first over a cliff and had to stop myself for a few seconds and let the dizziness subside. Plus, I had to take stock and make sure all my bones were still encased safely inside my skin. Thankfully, they were. The prickers and thistles had their way with me though. 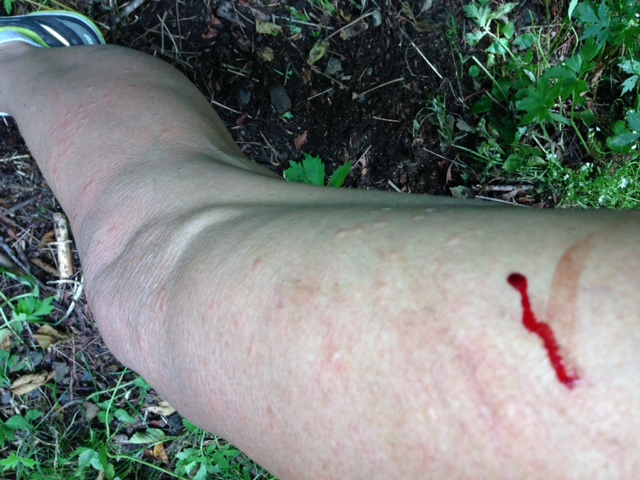 OUCH, talk about painful. Look at all the swollen bumps and scratches!

I climbed up the hill and onto the bike path and ran to Tony, who was still laying on the side of the path. Not moving. Still. Immobile. I asked him if he was ok, and he said he didn’t know yet, but still wasn’t moving. Finally I saw him move his arms and legs and I knew at least he wasn’t paralyzed! At this point, I started running around in circles. This is what I do when I am on the verge of panic. “What can I do for you?” “Can you move your legs?” “Can you speak?” “Can you talk?” “Do you want me to call an ambulance?” I am sure if he had his wits about him, he would have told me to SHUT UP A MINUTE!

I ran back to my bike, and retrieved my phone, just in case I needed to call 9-11. As I ran back to him, I had this (rediculous) thought that I should take his picture in case I needed it for evidence or insurance…..huh? Really??? I know this makes no sense, but I did just fly off my bike and hit my head, so I am not judging my actions in any way. Her’s what he looked like: 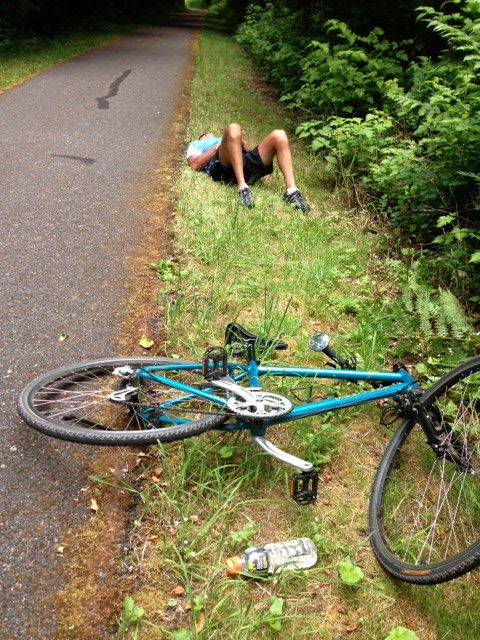 For what seemed like an eternity, he laid there, waiting for his body to tell him it was ok to get up, and I helped him take off his helmet and sit up. We both sat there and took stock of our injuries. We were both bleeding and dazed, but overall, we could stand up, walk, and pretty much function. I was amazed. I ran back and got my bike out of the bushes and saw that, other than a broken front brake, it seemed to be rideable. His was too. Since we were still four miles from our cabin, and we couldn’t spend the rest of the weekend on the bike path, we decided to ride back. It was not the most comfortable ride, to say the least.

Once we got back, we both showered and that’s when Tony said he needed to go to the hospital. It is a 40 minute drive to the nearest Urgent Care facility, and after waiting there for an hour, we got in to see a doctor. He started examining Tony and decided that he needed to go to the Emergency Room at the FULL hospital down the freeway. SO, we packed up our aching bodies and headed out. AGAIN.

Five hours later, after X Rays and exams, we left, armed with prescriptions for Valium and Oxycodone, and a bottle of Lidocane. Diagnosis: concussions, and a cracked clavicle (Tony). I had the remnants of all those nettles in my, so for about 9 hours, I had the sensation of fire ants crawling all over me and biting me. FIRE! The whole day seemed surreal to me.

The meds helped us sleep (Oh boy, did they!), and the next day, we both felt a lot better. Then I looked at our helmets. 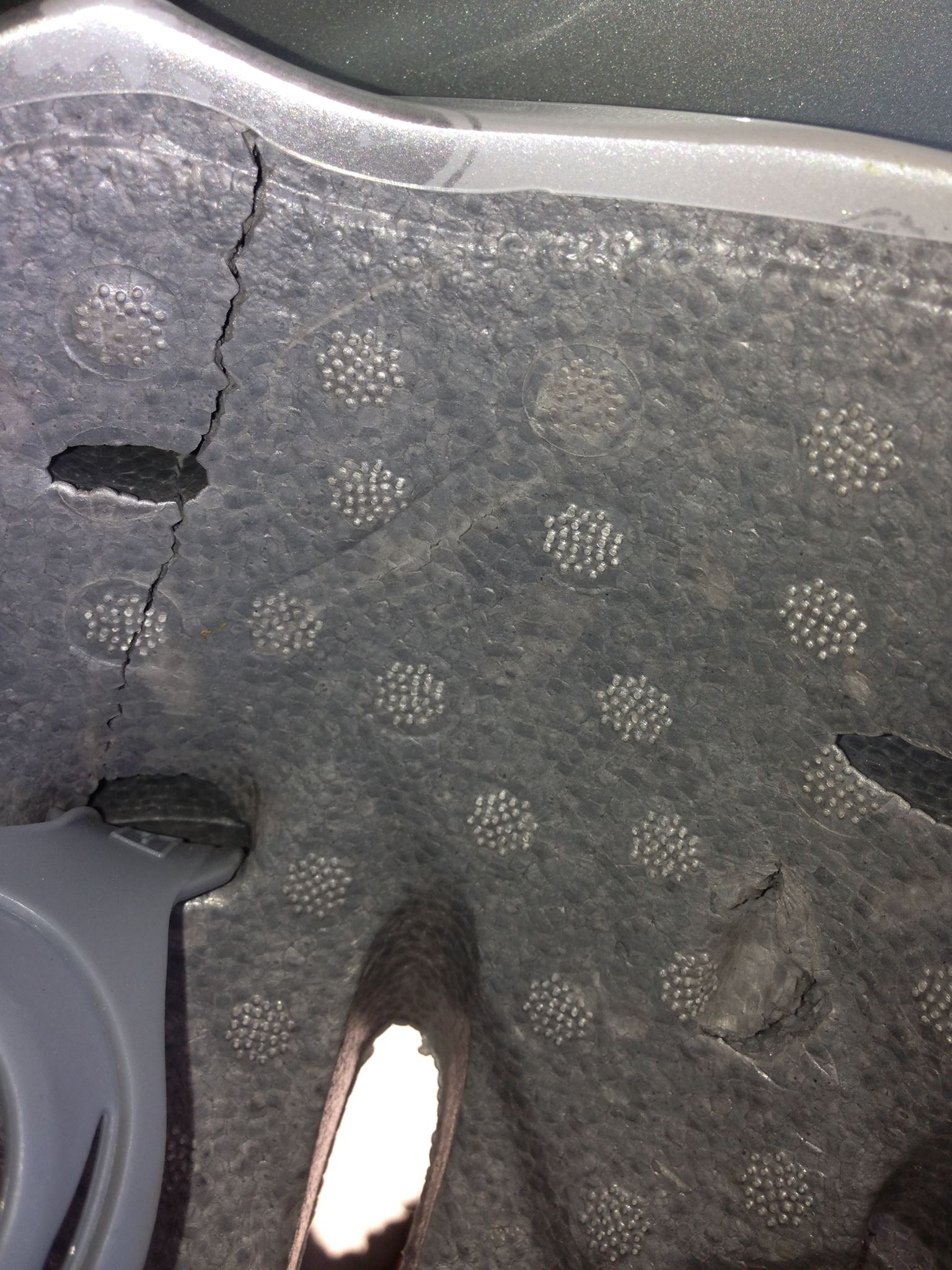 Glad I was wearing this! 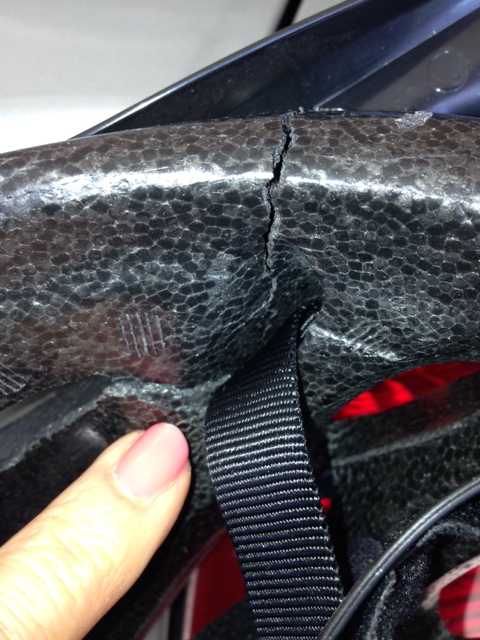 Suffice it to say, we were both very happy to be alive, recovering, and saved by our helmets. We spent a lot of time over the next few days recounting what had happened, and how “lucky” we were that things didn’t end up differently. In a heartbeat things can change. We still don’t quite know how we managed to walk away so unharmed! All I can tell you is that if you ever go for a bike ride. Wear your helmet!