Attitude is everything. Don’t I know it? I had a BAD one going into the 2014 Rock ‘n’ Roll Half Marathon. This was to be my third half marathon in five weeks and I was TIRED! Two weeks prior to this event was the Tacoma City Marathon. I ran that one with my daughter Dede, and had a lot of trouble on the hills. I pushed too hard early on and paid for it later in the race. 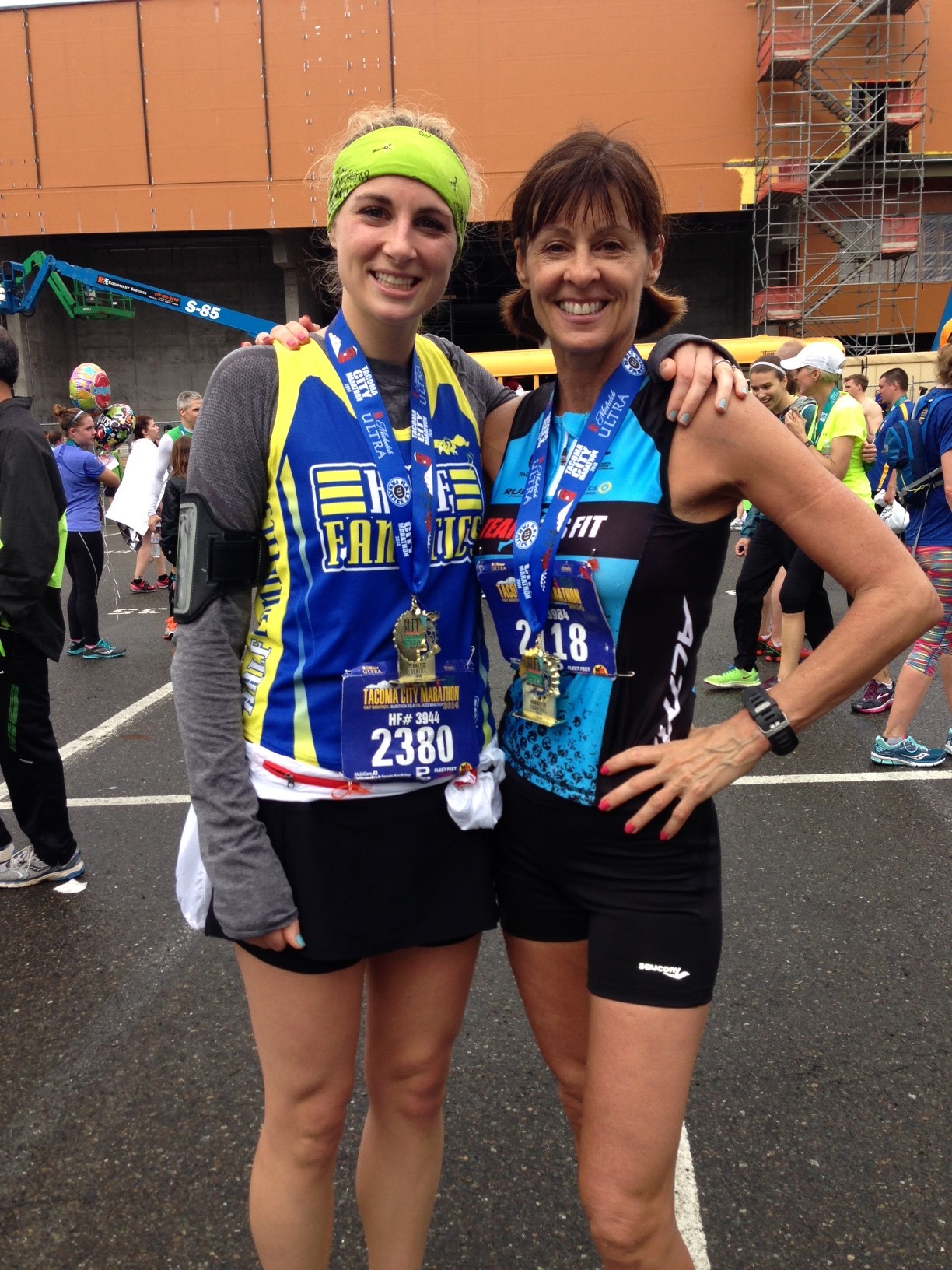 We had a tough race but finished happily, together

My body had some “bitch slapping” to do as payback no doubt, and I ended up getting very sick for the next two weeks. Full blown, in bed, sinus infection, aches, and exhaustion; you know the drill-pure YUK.

During this time I tried to fit in some recovery workouts. Yoga, stretching, easy spins on the bike, and a few shake out runs. Despite WANTING to feel like I was getting stronger, it was pure torture to even run 4 miles. I pretty much had a two week rest period. So, when it came time to ramp up to run another 13.1 mile race with 10,000+ other people, I was less than enthusiastic.

I was honored to have been asked to run for team Salvation Army, who sponsored my race entry. I was thrilled to be running for them, but I still was not feeling up to the task. 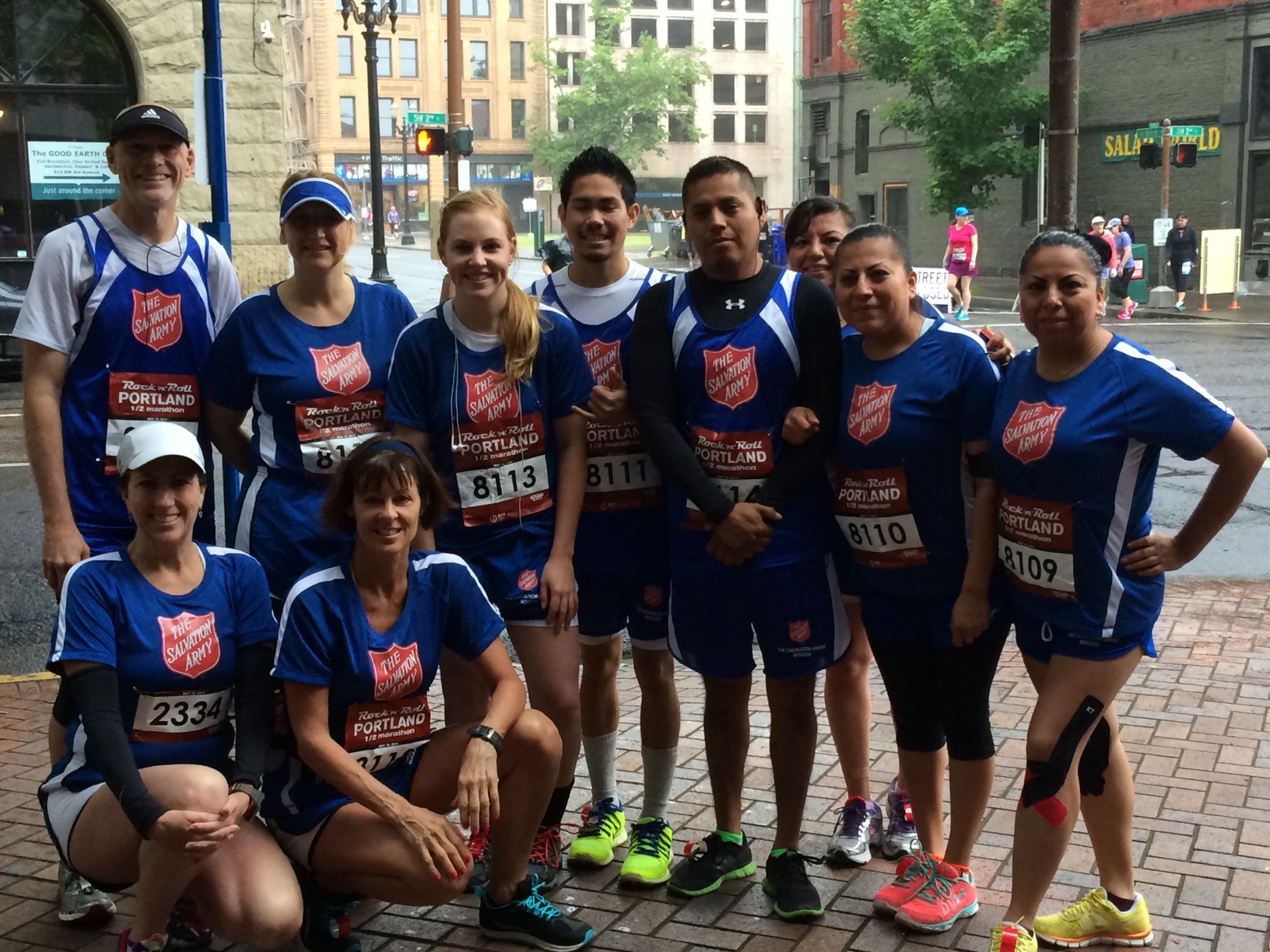 Lat year’s Rock ‘n’ Roll Half Marathon in Portland had left a sour taste in my mouth. I paid way too much money, felt like a prisoner at the Expo, the live music along the race route was horrible, I ran injured, and had a slow, painful run. Perhaps I still harbored some resentment toward the whole RnR concept and this contributed to my bad attitude.

Going to the race Expo this year, I kept an open mind. Let me say this: it is easier to go through Customs in a foreign country than it is to get through the packet pick up at this event. Show ID. (translation: no group packet pick ups-EVERYONE has to show up in person to get their packet. AND, they don’t let you leave by the same way you enter, so you HAVE to go through the Expo to get out) I had to fill out a form telling them where I lived, how was I going to get to the race, did I own a car, how long I was staying in Portland, bla bla bla.I’m surprised they didn’t take blood samples.

The gear bag was this quazai-paper-kinda-like-a-reusable-grocery-sack kind of bag. 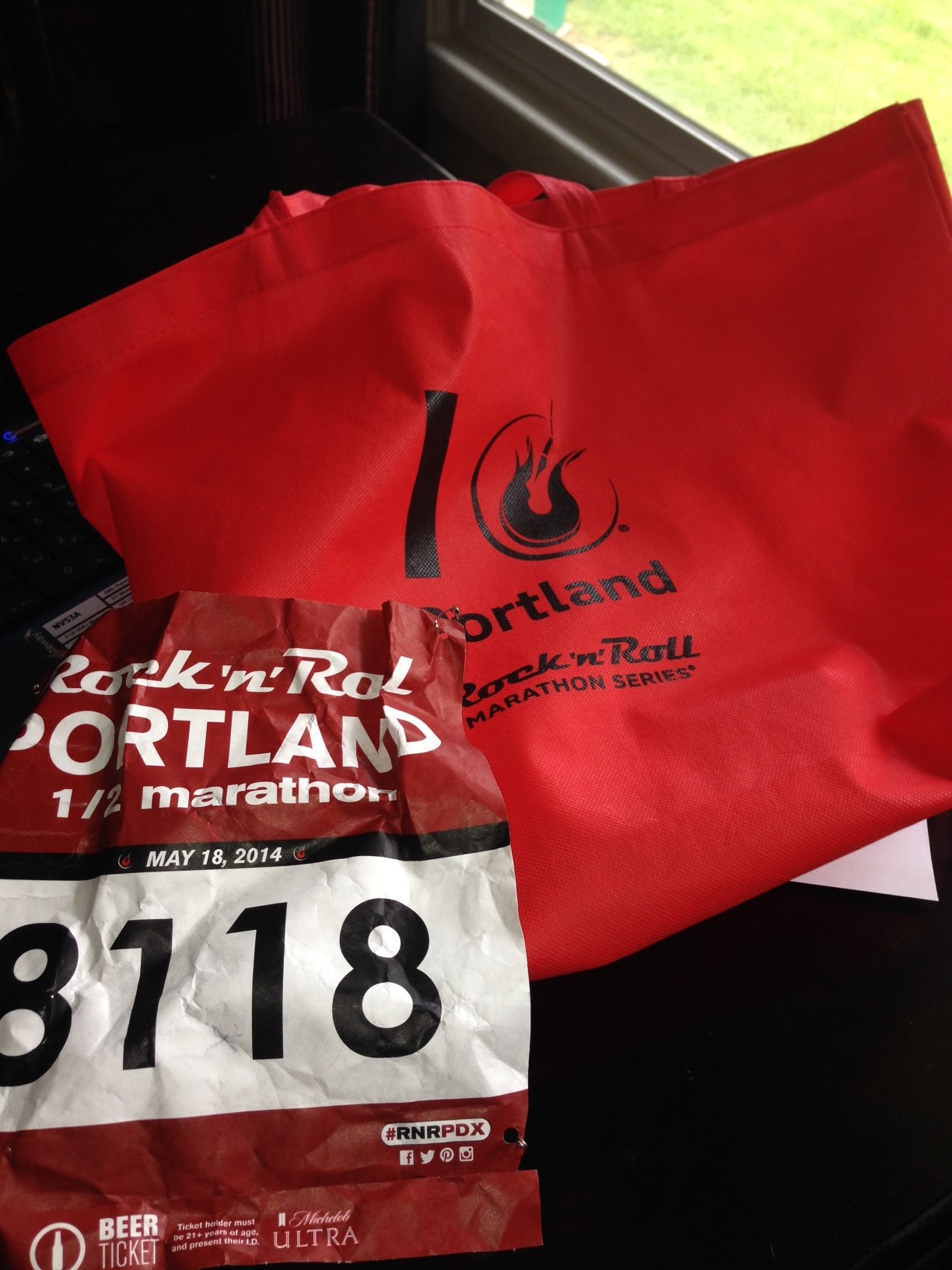 The instructions were to use this as your gear check bag and they included a zip tie. Dear Rock ‘n’ Roll organization: this is Portland, Oregon and you are hosting this event in May. Do you know that it rains here in May? Do you know that a zip tie will not close a bag of this type? How do we ensure our checked items will stay dry and remain inside this stupid bag while it is thrown into a truck with 10,000 other bags? Oh brother!

To their credit, RnR put on a great Expo. I let go of my bad mood and fully immersed myself in the festivities, even laying down some cash for these bad boys: 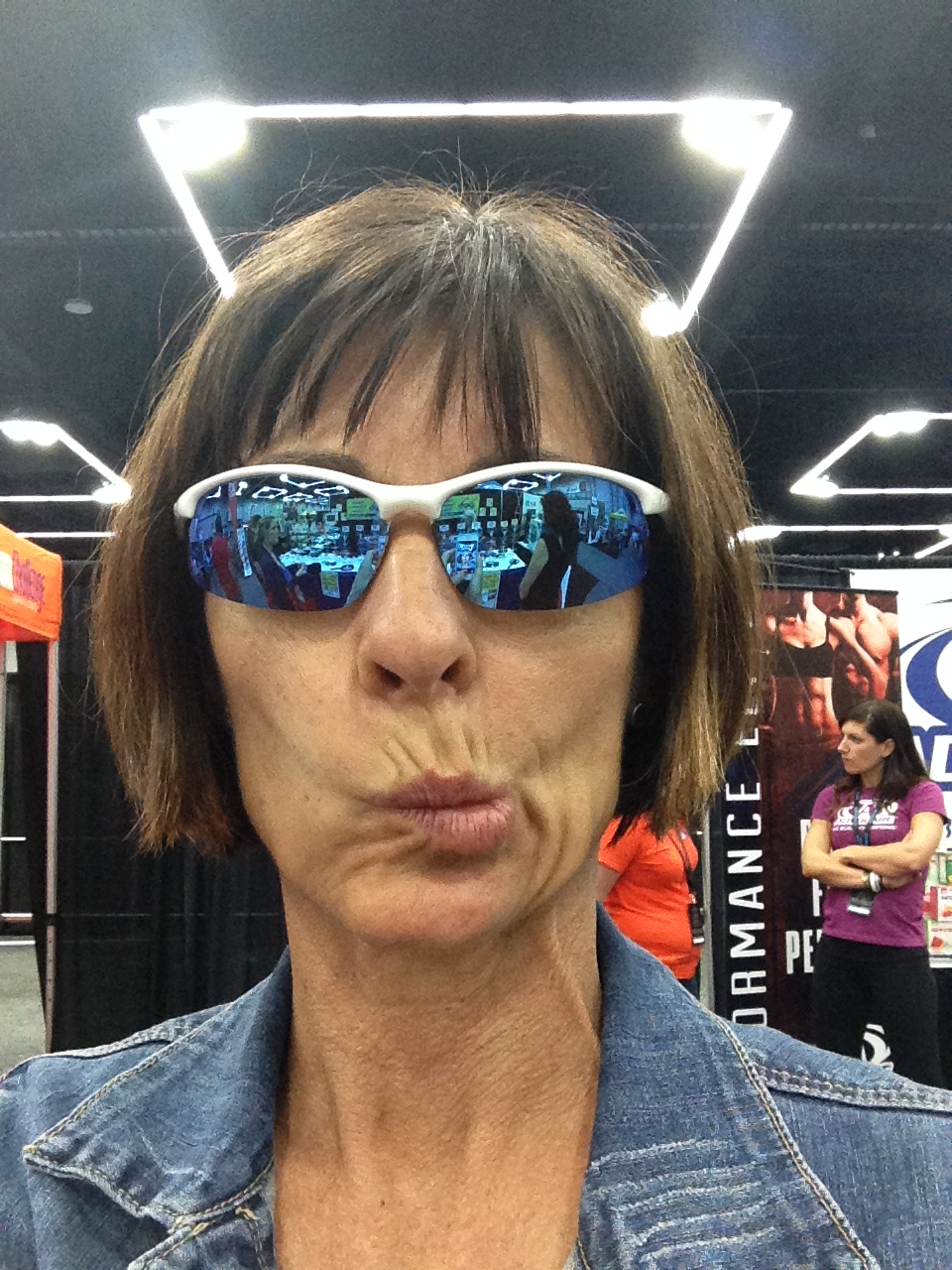 Just wait until I wear these on my bike. BAD ASS!

Sunday morning arrived in typical Portland fashion; overcast, cool, and threatening to rain. I debate what to pack for weather protection and decided it was most important to pack warm dry clothes for AFTER the run, since I knew there were be a lot of standing around and socializing when we finished in all of our glory.

Thankfully, my friend, Suzanne was way more prepared than me and had some extra ponchos. This is how I looked just before the race. 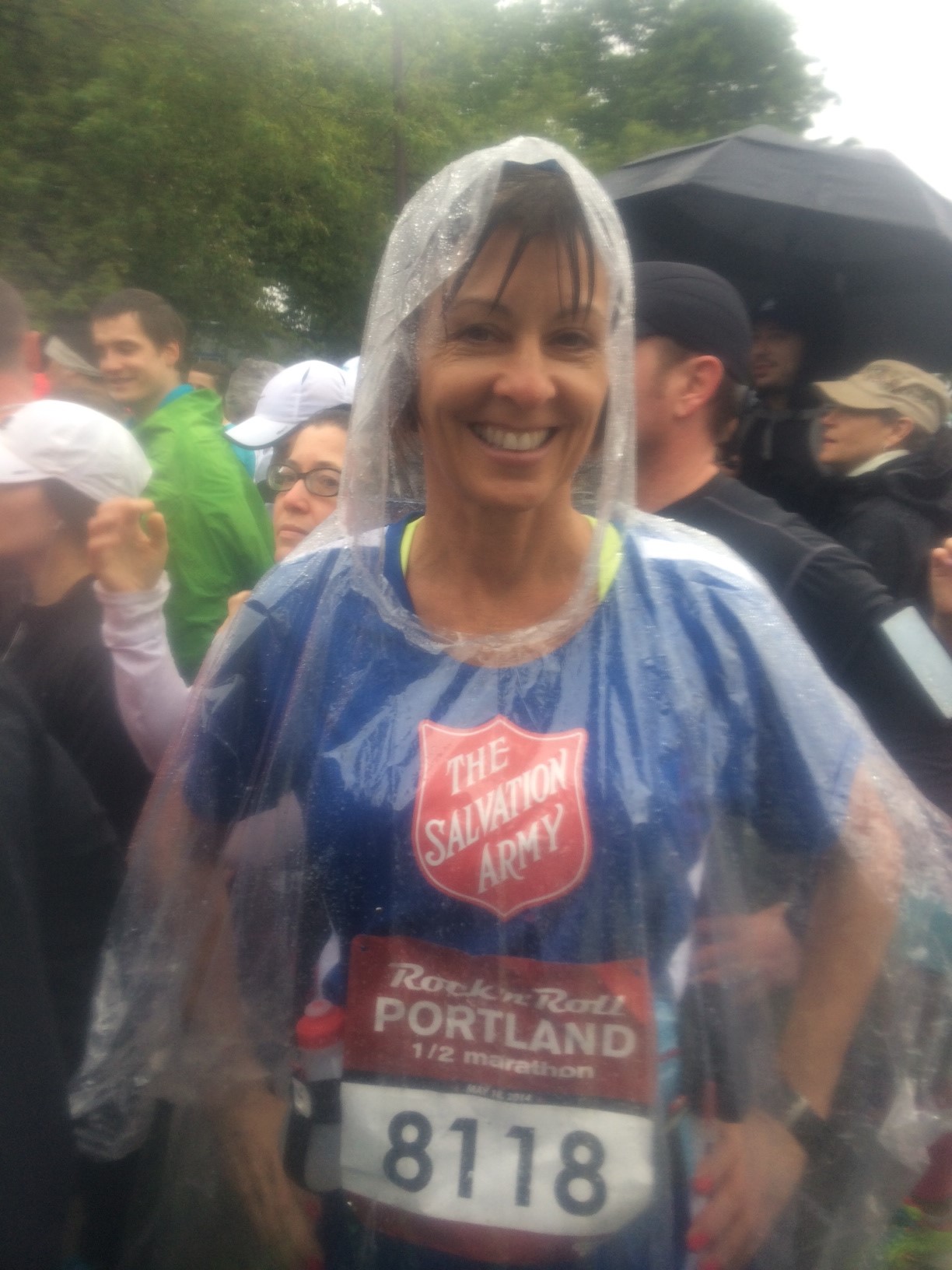 Liquid sunshine was in abundance that morning. Thank God it was warming up!

If you’ve ever run in one of these types of mega races, you know that you have to have a sense of humor and never expect to PR. You start running shoulder to shoulder with every skill type of runner and it takes a mile or two before you even have room to bob and weave around people. This day was no exception. Suzanne and I had planned to just run together until one of us decided to drop back or run ahead. There was no pressure to go fast or necessarily stay together. “Let’s just see what happens” was our motto. We stayed together for most of the race. Things went well for the first three miles or so and then this happened: 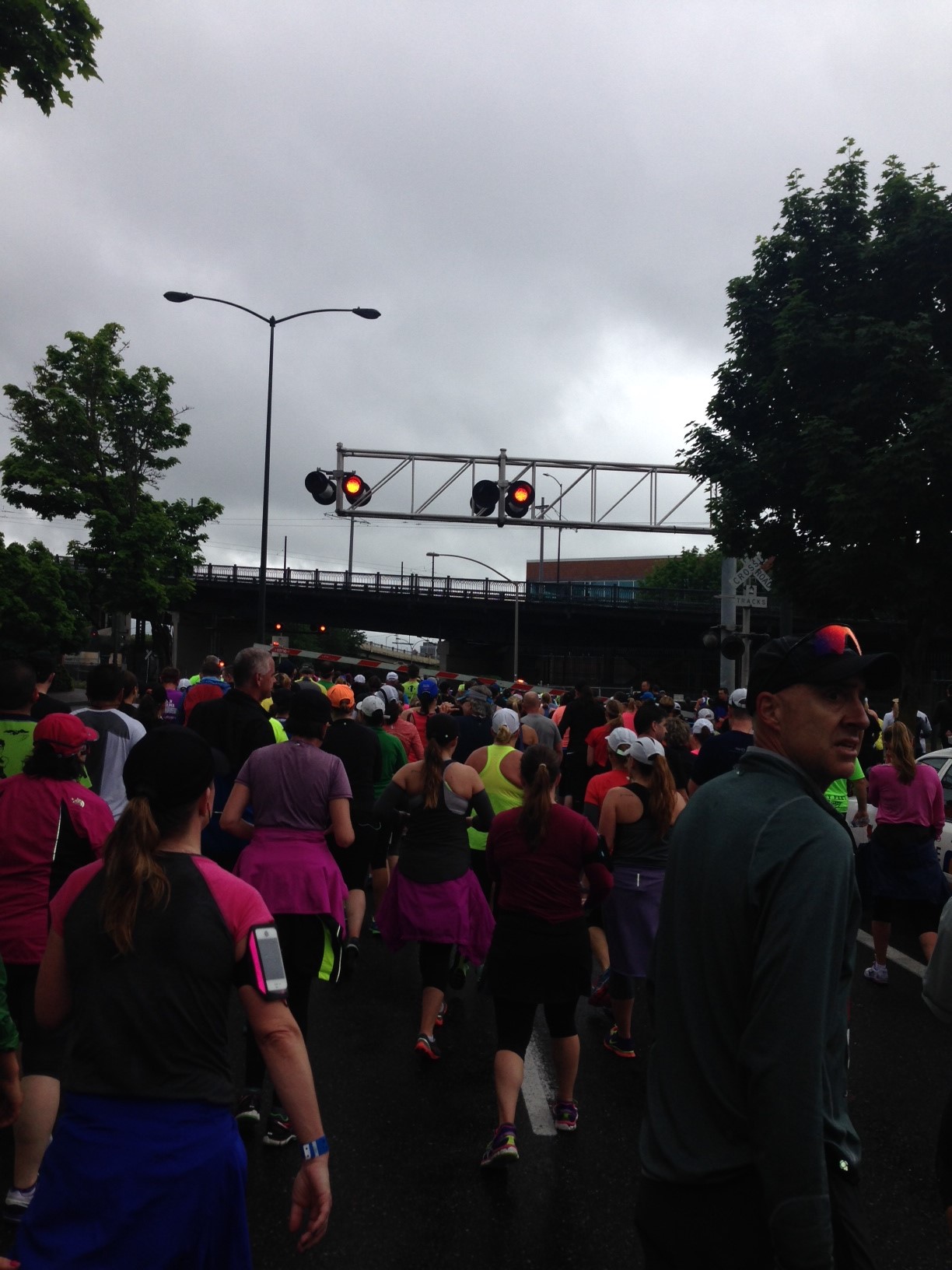 Train stop! You have to have a sense of humor when running in Portland! After this, I just had to laugh. We got going again rather quickly and decided to make a potty stop. I usually try not to stop during races unless it’s an emergency, but on this day, we ran for fun.

The music this year was a far cry better than last year, and my mood started to lift as I found my recently rested body feeling strong and loose. The hills on the course that wrecked my injured tendons last year were a breeze for me to conquer this year. I got into my rhythm and focused straight ahead. At one point I felt so good and checked in with my Garmin, to realize that, despite the train stop and potty stop, I was not too far off from possibly finishing close to my PR time. This set me off running at a faster pace and I was determined to finish as fast as I could. My spirits SOARED…right up until the traffic stop. Yep. Portland Police stopped us to allow traffic to cross the route. Twice. During a race. Seriously. I may or may not have cursed at a cop. I’ll never admit to anything.

After the last stop, I flew to the finish. My official time was five minutes slower than my PR, but with the FOUR stops along the route, I was thrilled with my performance. My IT band wasn’t so happy, but that’s a price I pay for negative splits.

Afterwards, I got to pose with some of my Honey Badger friends. 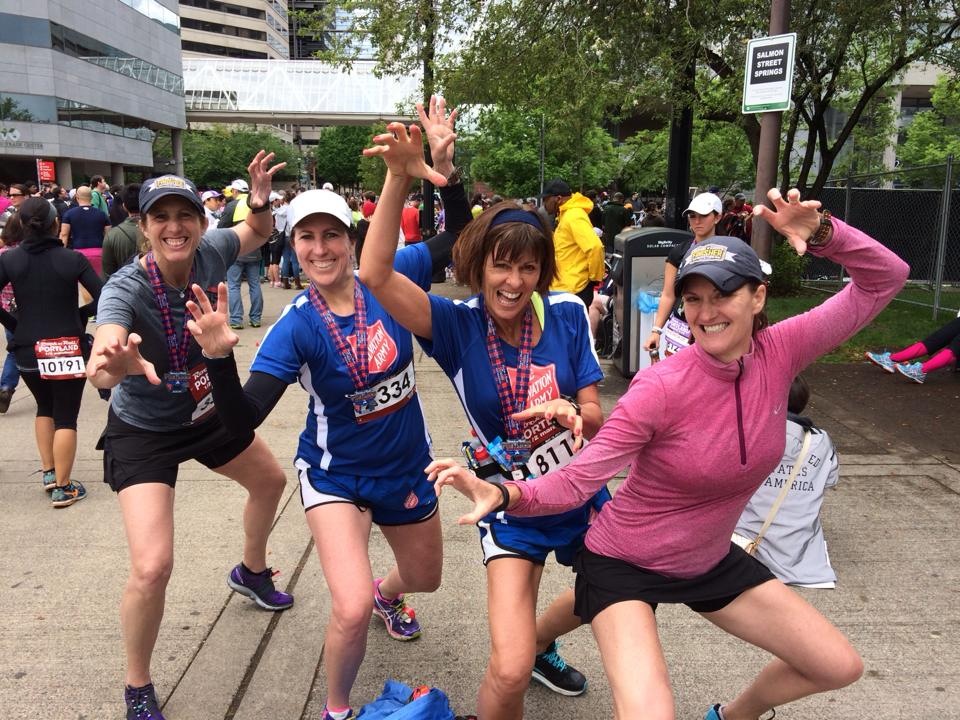 We are so silly. I love these women!

I also got to play with some of Portland’s Urban Goats! 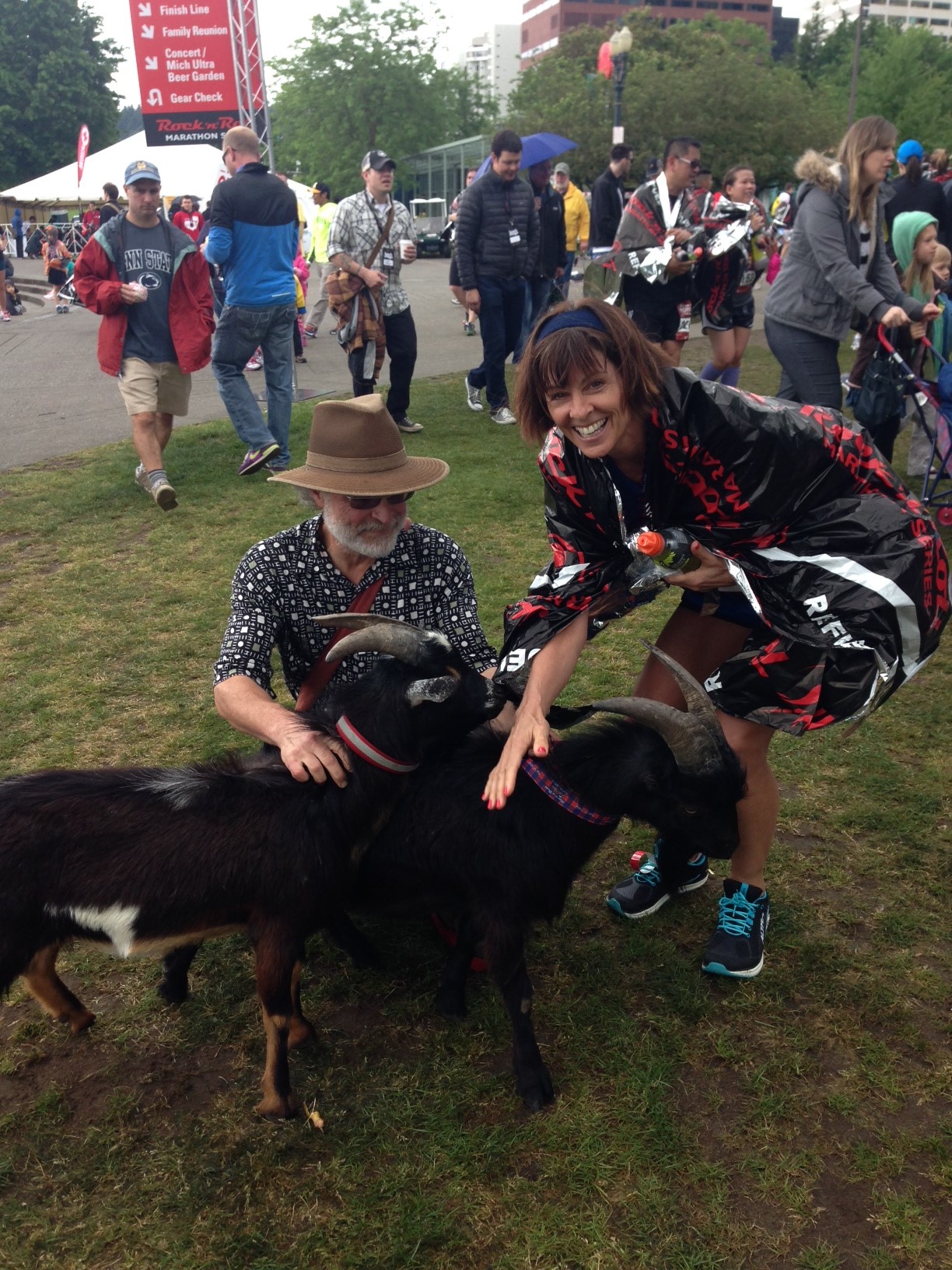 This turned out to be a fantastic race and a stellar day. I limped to the medical tent and got a massage, managed to walk the mile back to the car, and later met up with Amy, one of the girls I ran with, and had a foot soak and reflexology at Feel Good Feet 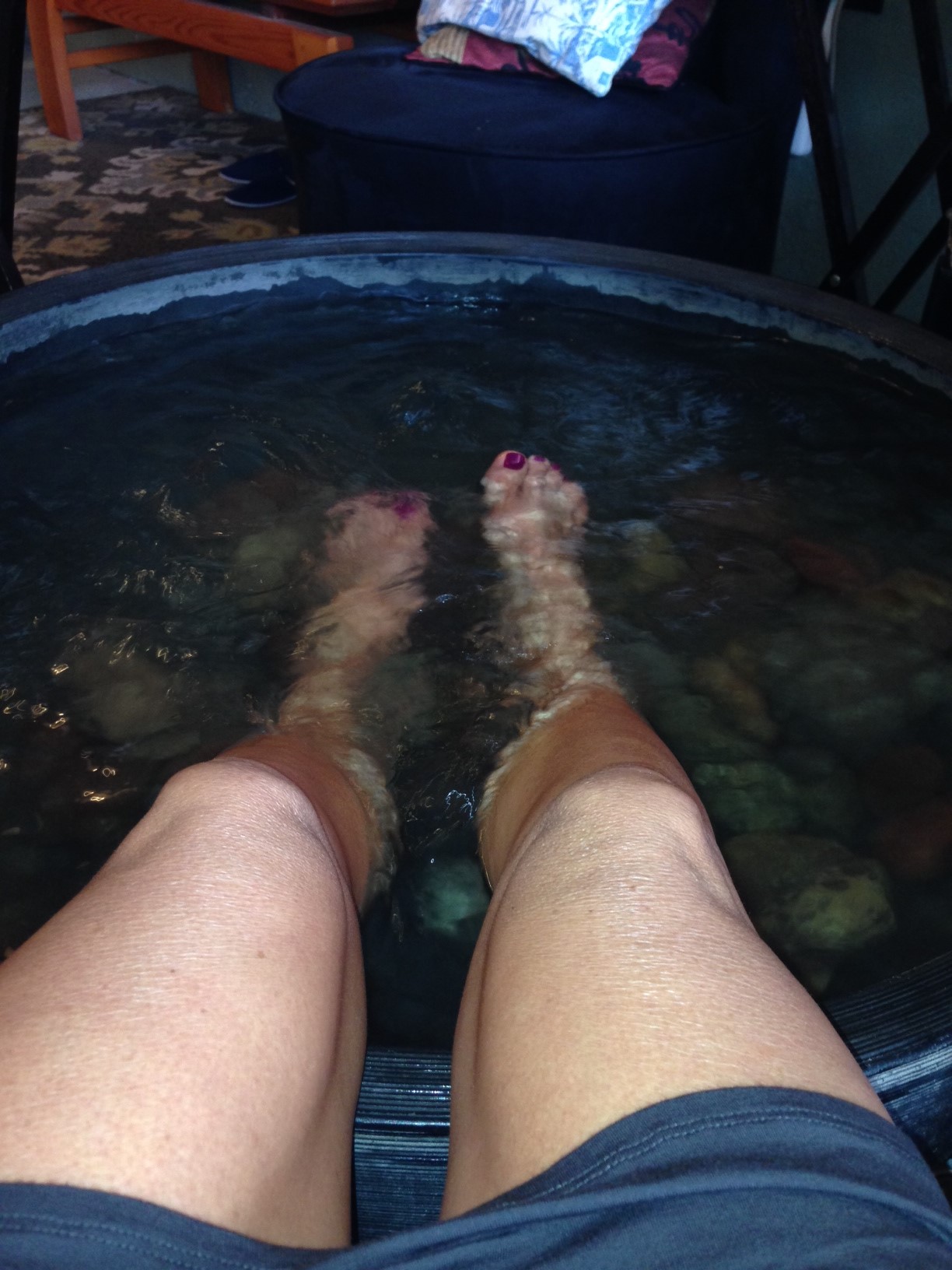 Later that evening, I rested my legs in bed with a good book and a great dog. 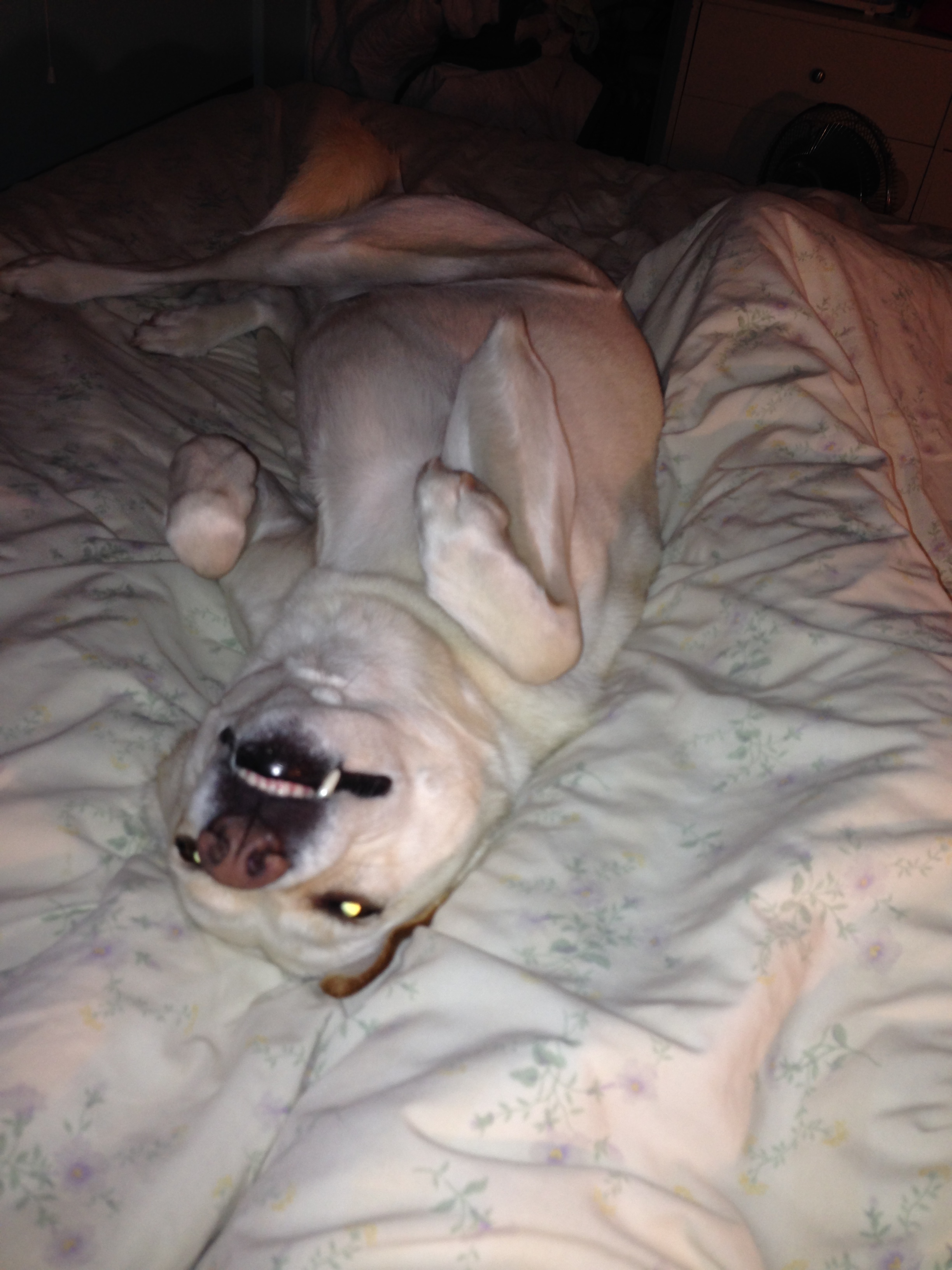 So, despite my bad attitude going into this race, I had a spectacular day. I spent it with friends, had a lot of laughs, played with goats, and ran for a wonderful organization. Now it’s time to  take a few weeks off from racing, keep training, and get ready for my first triathlon for the season in June.