On October 26, 2014, I, along with approximately thirty thousand other people participated in the 39th annual Marine Corps Marathon. To say that this event was an “experience” wouldn’t be enough. Words escape me, but since this is a WRITTEN blog, I’ll give it a try.

I entered this race in a charity slot with the  Zero The End of Prostate Cancer organization. My dear friend and former coach was diagnosed with Advanced Stage IV Prostate Cancer last Winter, and I wanted to do something to help in the research and awareness effort with Zero . In all, there were around twenty seven  athletes on our team from all over the US that  raised money and secured an entry into the race.

After a hectic day of travel on planes, trains, and automobiles, (in that order, I might add) a large group met up for lunch and the ultimate pre-race feast at an Italian restaurant. Holy Moly, the FOOD!!! The chef was kind enough to cater to my gluten free needs, and made me a whole plate of special pasta! 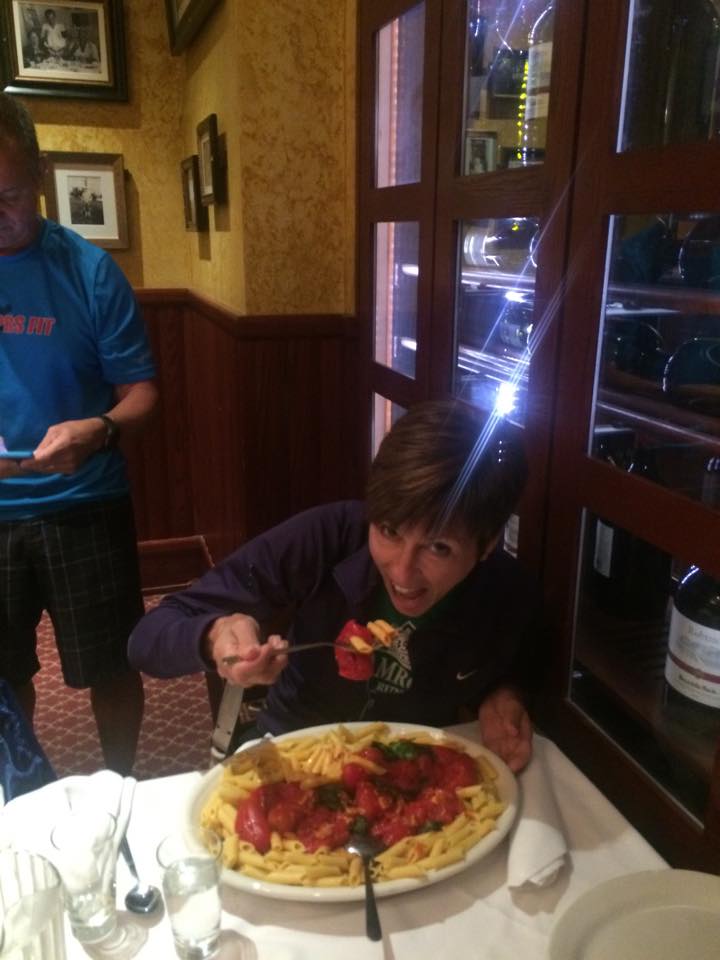 Another round of trains and automobiles, and another group of us met up for a pre race dinner. EAT ALL THE FOOD!!!! 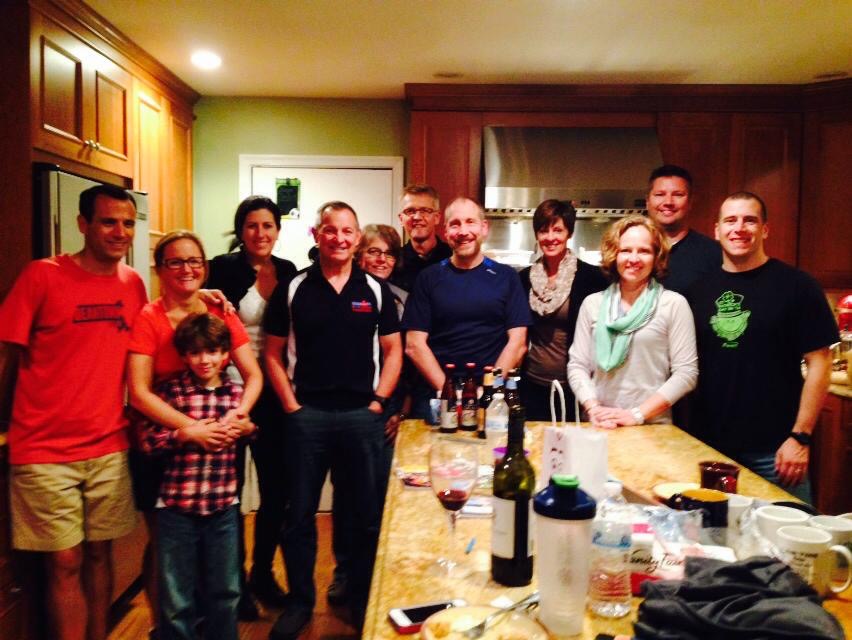 Oh, and yes, beer and wine are part of our training.

The morning of the run came very early. I awoke at 4am so I could have my traditional breakfast of eggs, banana, peanut butter, and tea. We  took the car to the train, to the Pentagon, and then had a brisk two mile walk to the starting line. Yes, we walked two miles BEFORE running 26.2 miles! Naturally, I visited every porta potty along the way, and several times before the race actually started. Oh, my nerves! 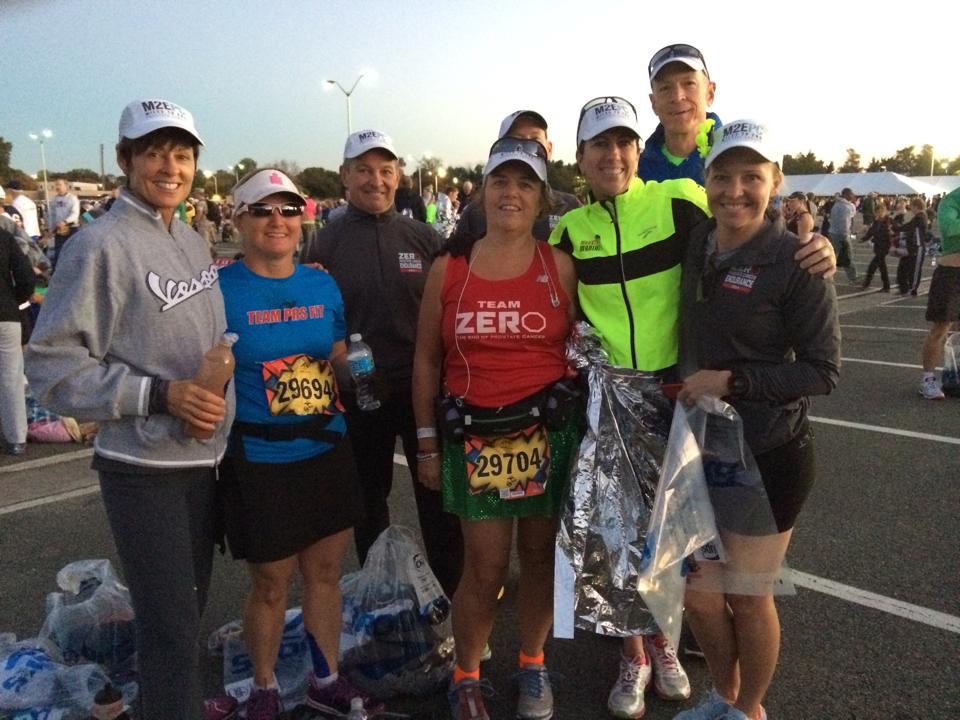 It was chilly while we waited for two hours at the start, so we huddled together and gave each other encouragement. (And mostly harassed each other with dumb running jokes)

A few minutes before the start at 7:55am, we made our way to the starting line. I could see dozens of men lined up “watering” the trees and bushes one last time before the big trek. I was supremely jealous of them at that moment. The crowd was buzzing with energy. 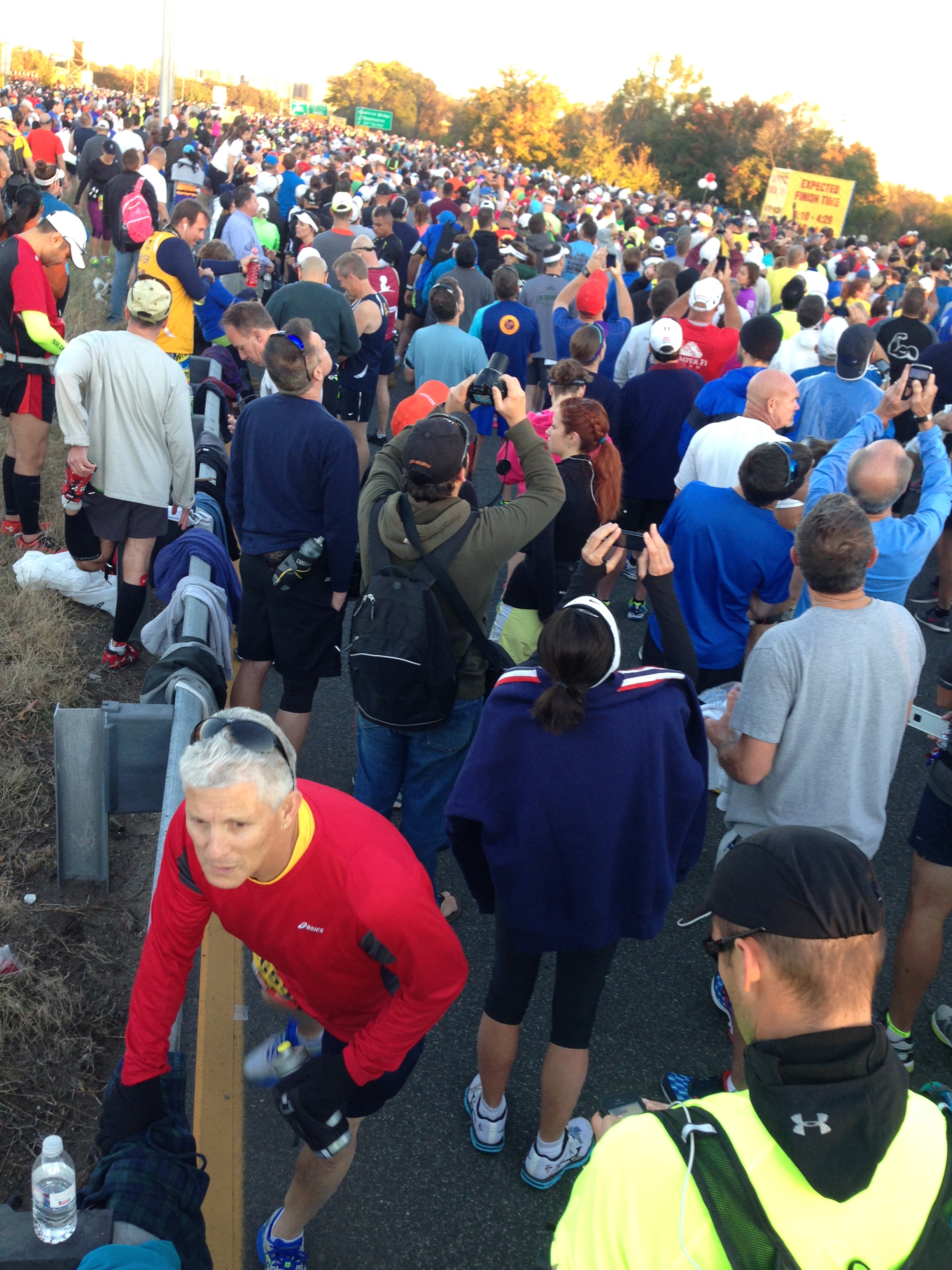 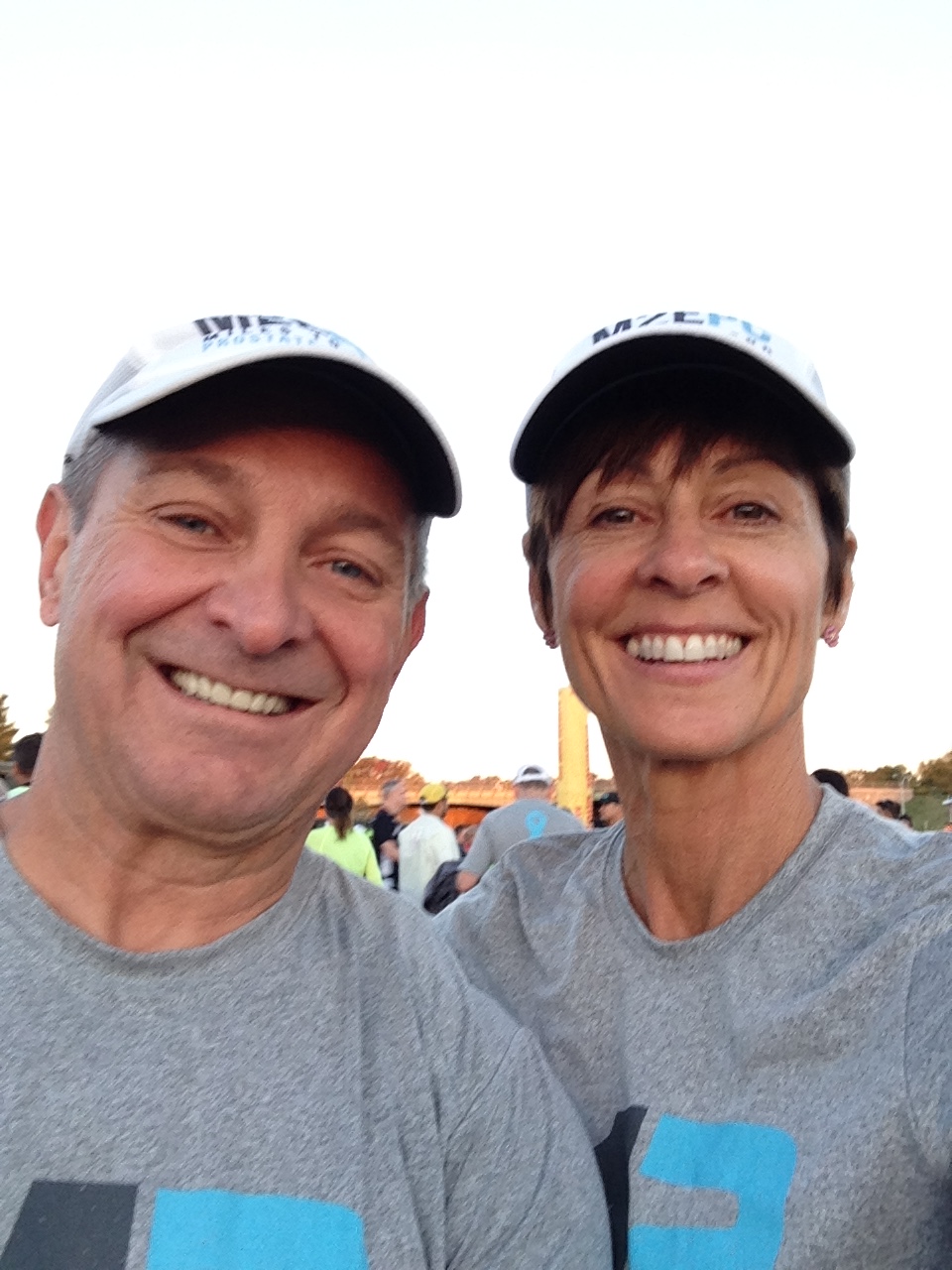 Coach Jeff-the reason we now know all about Prostate Cancer.

The energy at the start of this race was beyond electric. The Marines put on a show with fly by’s, hovering aircraft, and parachutes. This was my favorite:

One of many paratroopers displaying the flag

Right on time,  the race began, and we were off. My goal was to hang with coach Jeff and plan on a four hour and thirty minute finish. With almost thirty thousand people running shoulder to shoulder, there was a lot of bobbing and weaving, just to keep up a steady pace. (When it was all said and done, my Garmin showed 26.8 miles. That’s a lot of extra steps!) We managed to keep our group together for three miles, when I had to stop and use a rest room. FRUSTRATING!!! So I dropped off and got in a line. I tried to catch up afterwards, but never saw my team again.

Running this course was incredible. I looked at the sights, smiled at people, and generally absorbed the experience. The weather was perfect, and the crowds were abundant, loud, and very supportive. After running “alone” for two hours, things started going wrong. At one moment, I was flying along, barely feeling my feet hit the ground, and in the next, my left Achilles, calf, and both knees began to hurt. I mean HURT. like, “Uh oh, what’s going on, and am I going to be able to finish this race?” kind of hurt. I ran my first two marathons with two torn tendons and a torn muscle in my left foot and that didn’t hurt as badly as THIS! I started to crumble. Just about this time, my emotions surfaced, and the realization that I was  possibly injured and not able to complete this run became a possibility. Then everything around me became a trigger. There were  Army, Navy, Air Force, and Marine soldiers everywhere. American flags float in the breeze. People proudly ran with flags. 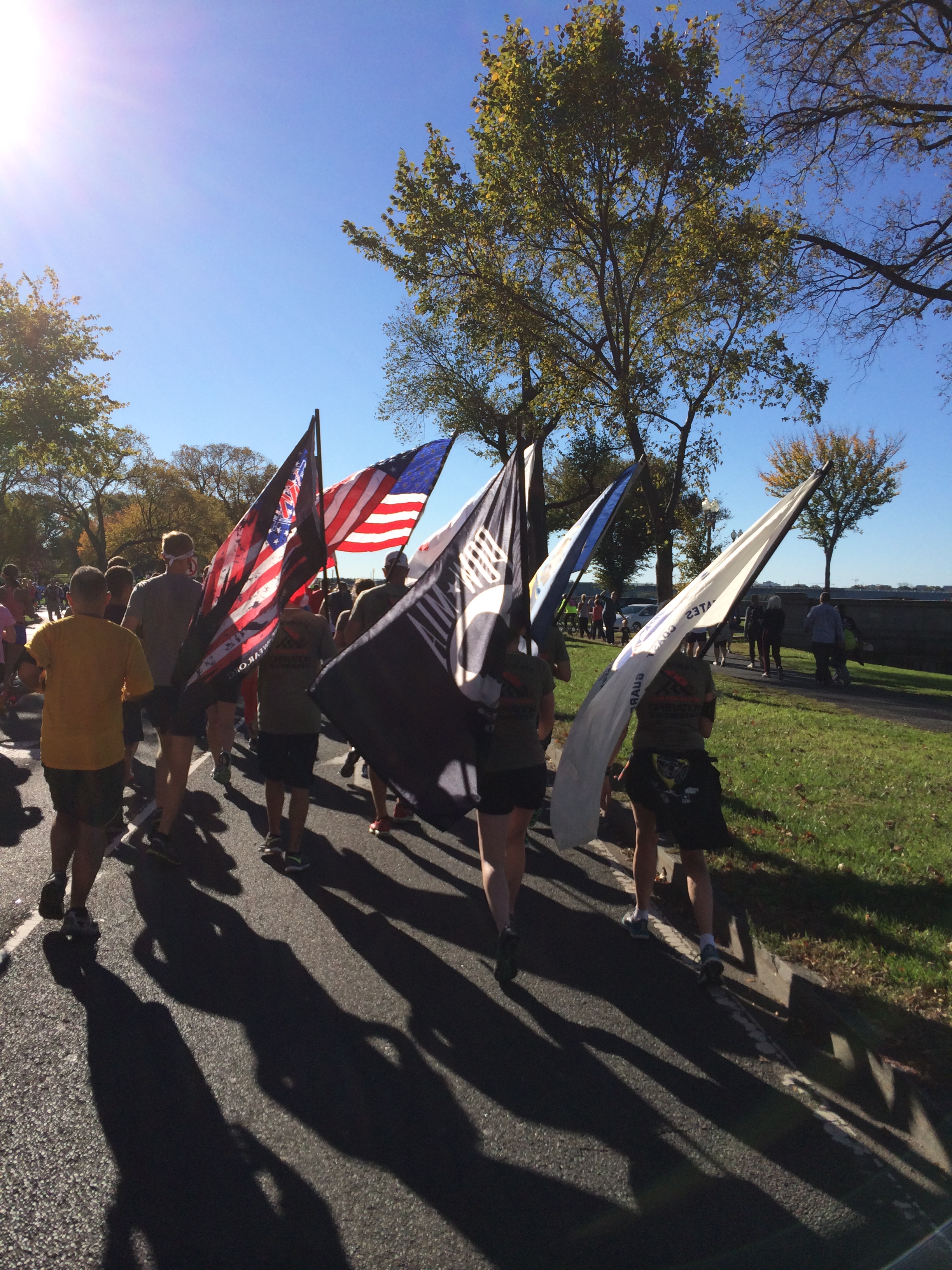 I began to tear up at the sight of this. I watched the monuments go by, and saw the soldiers-mere babies, in uniform, and cried some more. I thought of the reason I was here. Not just to run another marathon, but to support a cause that has become near and dear to me. I’ve never run for a cause. I was now a part of a purpose. It was right about this time that I came across the Blue Mile. This is a mile long stretch of the course where people hold flags and the street is lined with photos of fallen soldiers. 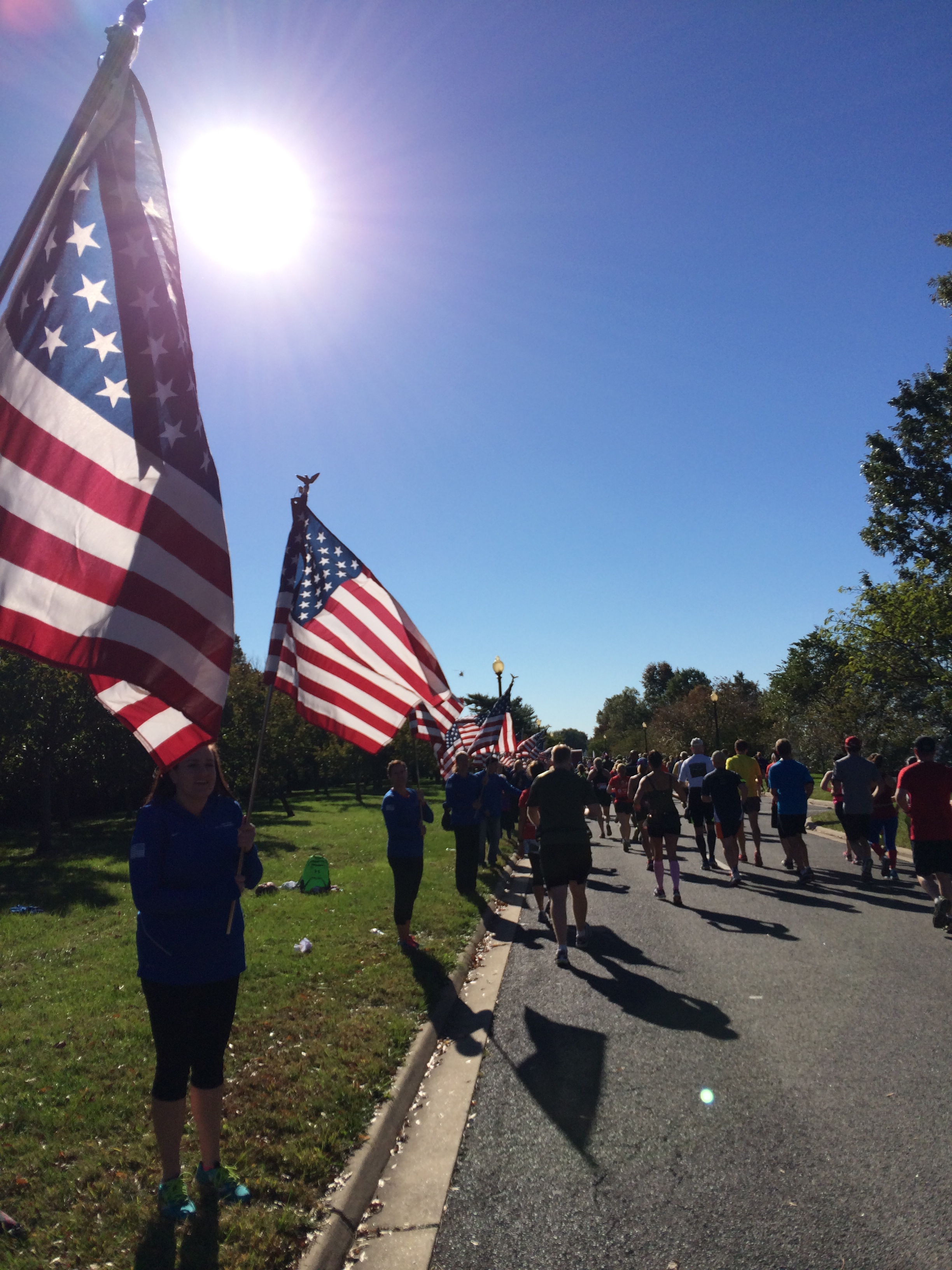 I had heard about this, but nothing could prepare me for it. The photo  posters are on stands, evenly spaced, and they are hauntingly beautiful. I found myself slowing down so that I could touch the top of each one, and whisper “Thank you” to each one. I sobbed for these people. I cried for their families. I didn’t care who saw me. I was not alone in my public grief at this spot of the journey.

I still had miles to go. Suck it up buttercup.

The second half of the marathon was an exercise in grit, determination, extreme cursing, and involved a lot of self talk. I  hated most of it, cursed my lack of training, my lack of mental toughness, and tried to keep it together and power through. I had a bad attitude, and horrendous pain in my legs. I put my head down and stopped looking at the other runners, and ignored the crowds of well wishers. It was the darkest race I’ve ever run. When I saw the finish line, and the row of soldiers, lined up giving “high fives”, I couldn’t even muster the strength to participate. I crossed the finish line in a daze. When I finally looked up to see the young, smiling Marine that congratulated me on my finish, and put my metal around my neck, my fog lifted. I gave him a huge teary eyed smile, thanked him for his service, and thanked God for letting me be a part of this experience. OO-RAH!

There was a lot of limping for several hours after the finish. It was my slowest marathon to date. It was the biggest, most profound one as well. I met people I had only known online, deepened friendships with them, got to see our incredible nation’s capital, and raised money for Prostate Cancer research.

I will be blogging about Prostate Cancer in the future. I am excited to share that I have partnered up with Zero  again and will be participating in  Ironman Chattanooga next September. If you would like to make a donation of any amount, please do so here: http://www.ironman.com/triathlon/events/americas/ironman/chattanooga.aspx#axzz3HeVD6LdT.

Thanks for reading my blog.