I was excited and nervous  for my Ironman Lake Steven’s 70.3 race. My training, with all it’s high’s and low’s got me here, and there was nothing left to do but get it done. Jeff bought me a Cervelo P2 bike two weeks before the race, but I didn’t have time to get a professional bike fit. I rode it for several days and I started feeling comfortable using the aero bars, and felt completely confident.

I call her Sylvie

We stayed in Mukelteo, Washington, about thirty minutes from Lake Stevens. The alarm went off at 4:30 am and we planned on leaving my hotel at 5.  I had already checked my bike in the day before, so I just had my transition bag full of crap to carry. Jeff was an absolute doll. He did everything for me! (I’m still getting used to being with a man that insists on carrying my bags for me.) I tried not to go over my list for the millionth time, but I couldn’t help myself. All my liquid nutrition was mixed the night before, and set in the cooler.

It was a chilly morning, with a lazy mist on the lake.

The air temperature was in the 50’s but the water was 69 degrees, and I couldn’t wait to get in so I’d stop shivering. My wave-the old gals, was the last to enter the water. In the final moments before all my races, I  shut out the surrounding noise, go deep inside my head, and meditate quietly on what is about to happen. In those moments, just before the swim, I undoubtedly ponder the same thing EVERY time: “Oh God, now that water is full of pee.”

I jumped in and waited for the gun to blow. As soon as it did, the churning began. It was quite civil, however, and only lasted a few minutes. I immediately saw the buoy line, and rejoiced. I’d never done an Ironman event before and had only heard about this line. WOW, did it make a difference. Especially on a morning like this, with the line of bouys being hidden in the fog, it was amazing to just keep my head down and follow the underwater line.  I had to maneuver around a few other people several times but never lost sight of the line. When I exited the water, I felt GREAT, like I could have swam forever! 1.2 miles done.

those are “goggle eyes”, not bags!

My transition to the bike was quick and uneventful. I remembered to down a bottle of GenUcan, ran to the exit, and mounted my bike. Off I went, feeling like a rock star. It was only minutes into the ride that I realized  I was cold. No big deal, I’ll warm up shortly. The weather report called the upper 70’s, so I was not at all concerned. What I hadn’t thought of was the fact that it was only now 8:00 am, and the first 48+ miles of this bike ride was on winding mountain roads, in the forest, so there were little to no sun breaks. Within the first half hour, I was so cold that my feet started to cramp. Then the shaking started. “How is this even possible?” I asked myself. I’ve done this for (only) three years and am NEVER cold on the bike! Try as I may, I could not stop  shivering, and a few times shook so badly, I nearly tipped the bike over. The second thing that happened was  stomach cramps. I was dutifully drinking my GenUcan, but nothing was able to leave my stomach, because my body was tensed up, fighting to get warm. All my muscles clenched tightly the entire ride. I tried sitting up and changing body position, but nothing helped. 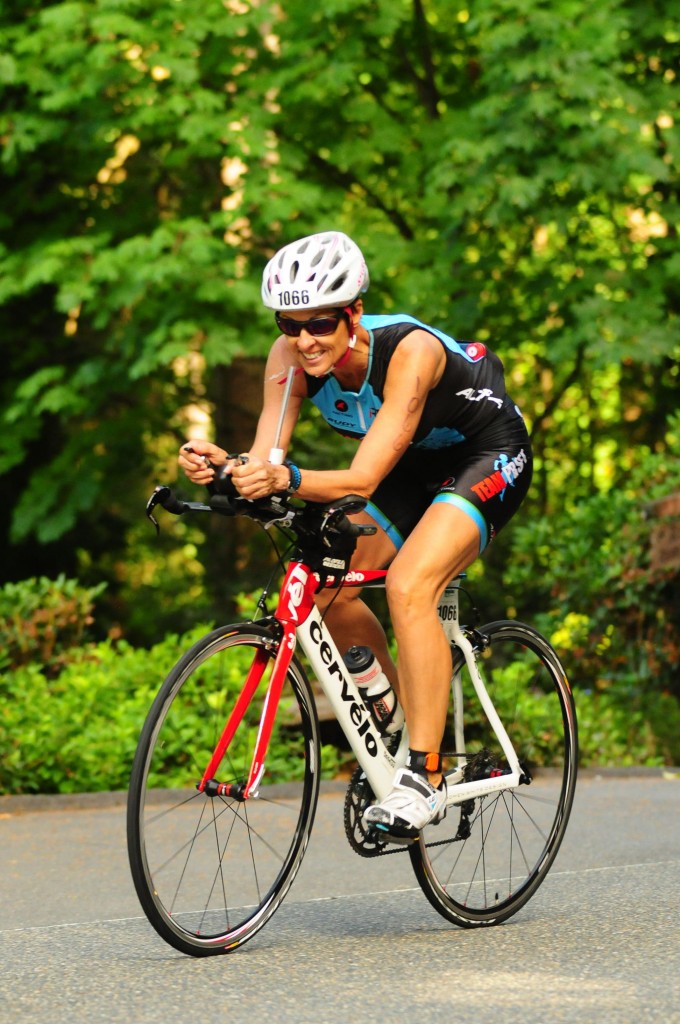 I always smile for the cameras

Beside the cold, I experienced pain in my knees and IT Band at mile 15. This was completely unexpected, but I now know that it was due to the fact that I hadn’t had a custom bike fit. The ride became horrendously painful and nothing would stop it. The hills only made it worse. I can handle a lot of pain, but this just about dropped me. My ONLY thought on that ride was “GET THIS OVER WITH!” Not a very pleasurable way to spend 56 miles.

The elevation was a bit of a challenge to me. I’ve trained on hills in Portland, but nothing like the one’s around Lake Stevens. I saw people walking bikes up hills, stopped, hunched over  heaving, and one or two just standing on the side of the road with the saddest looks on their faces, defeated by the climbs. I was NOT going to be one of those people.

If you’ve read my blogs, you know that I get  emotional during races. I cry. I cry when I struggle badly, (especially when I get an asthma attack) and I cry at finish lines. It’s what I do, and I’m ok with it. It’s not a weakness; it’s just how my body reacts to the pressure and the relief. I live a stressful life and have a high pressure job. I balance several “balls in the air”, and maintain an even keel MOST of the time. When I race, I let it all out. This day was no exception. There is one hill at mile 38 that is legendary. First you make a ninety degree turn and then you go straight UP. (For miles and miles…no just kidding- it just seems like it) I knew it was coming and I was ready for it. I got into the small chain before the turn and tried my best not to look too far ahead, so I wouldn’t get freaked out by the length or grade of the hill. Not even half way up, I saw people dropping out. I kept going. I stood up and powered as hard as I could, but began seriously struggling with getting my feet to turn the pedals. In a sudden burst of Niagara Falls, the tears came. Loud, wailing tears. Angry tears. Fierce, from the gut, tears. I didn’t care who heard me because those tears gave me the power for another crank of the pedals. They ripped out of me and pushed my body up that God forsaken hill and along with the ever-encouraging roadside volunteers’ words of support, I mounted that hill and knew I was NOT going to fail today.

By the time I got to T2, I was pretty sure my legs were permanently damaged. (Drama queen, remember?) I dismounted and they immediately collapsed under me and I had to use the bike to hold me up.

The pain didn’t go away, and this worried me, so naturally, the tears returned. My stomach still cramped severely and the pain in my knees and IT Band was acute and relentless. I managed to get my bike back to the rack and then I fell apart. A volunteer came over and tried to be helpful, and Jeff was just outside the barrier asking me what was wrong, but I didn’t have a clue what to do. “Can I walk? Can I freaking STAND? Holy Crap, can I RUN 13.1 miles? (Insert more wailing)

I finally got my shit together and decided I had to try. I have never been a quitter, and today was not going to change that. Jeff asked me if I wanted him to pull me from the race…..he asked if I was going to be able to go on…..I remember saying “I’ll try.”

So off I stumbled, shuffled, limped, what ever you’d call it, and started the double loop course. The first few minutes hurt badly, but once my legs stretched out, it wasn’t so bad. My gut still killed me but I decided to take it slow and try and relax everything. Funny how things changed. The run was mostly exposed and the sun beat down, keeping it considerably hot. I hated the first loop of this run. I was miserable, felt defeated, and mentally, there was not much to brag about. I walked A LOT. When I reached the halfway point, however, something happened. I DECIDED I was going to have a good finish, and do it with pride because, damned it, I am a BAD ASS 56 YEAR OLD! I picked up the pace a little, walked when the  nagging side stitch was too  painful, and kept going. I drank one more GenUcan at mile 5, but after that, couldn’t take anything but sips of water. The run course has a few hills, but nothing outrageous. I enjoyed the second loop despite myself and was at that point on a fierce mission! 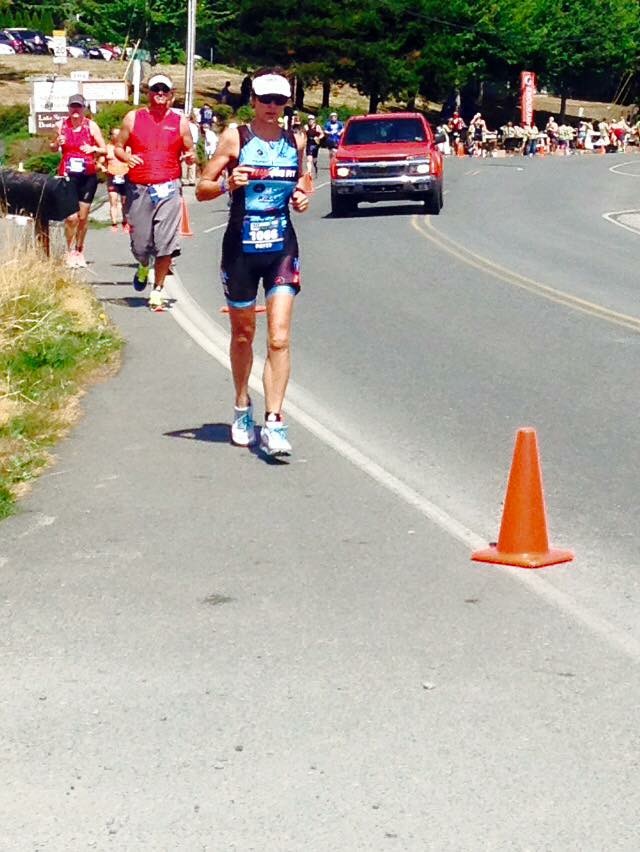 Somewhere in the last mile or so, I started to smile. I was going to finish a 70.3 mile race. On my own power. Wow. Me! The girl who started running at age 50. A Half Ironman! REALLY? Oh. My. God. My smile returned for the first time in what seemed like hours. 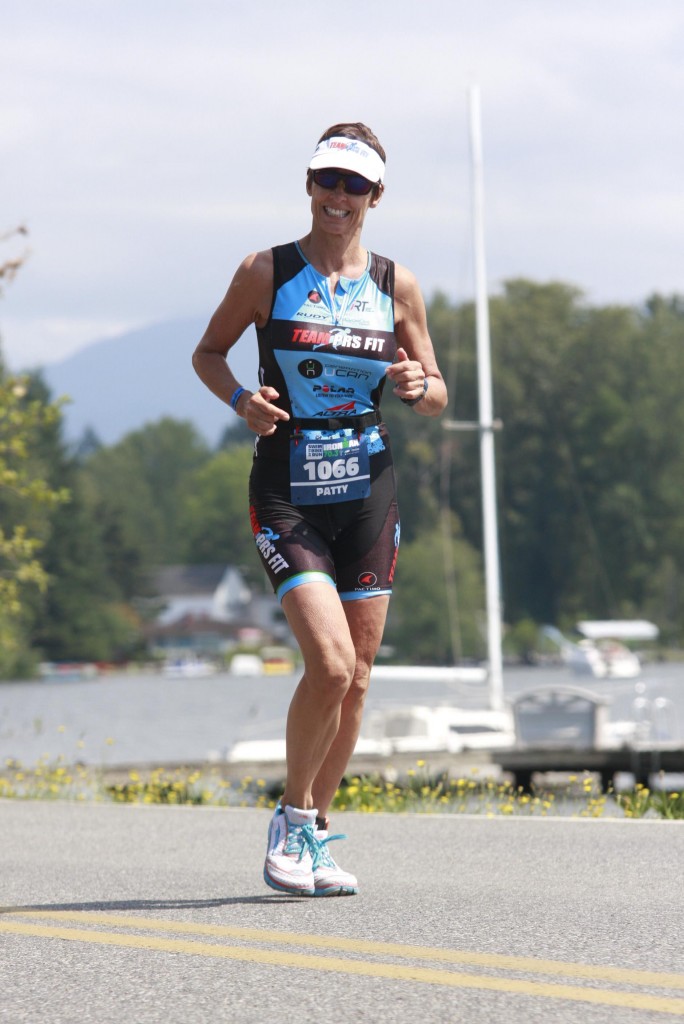 I ran most of that last mile and took a short walk break so that I would be able to run through the finish chute. (which, by the way, seemed like a mile long) I started to run through the chute, when all of a sudden my side felt like my appendix was bursting. Seriously-the worst stitch I’ve ever had. BUT, with all the people screaming, the cameras flashing, and the finish line approaching, there was NOTHING that was going to stop me from crossing that line with a smile on my face. 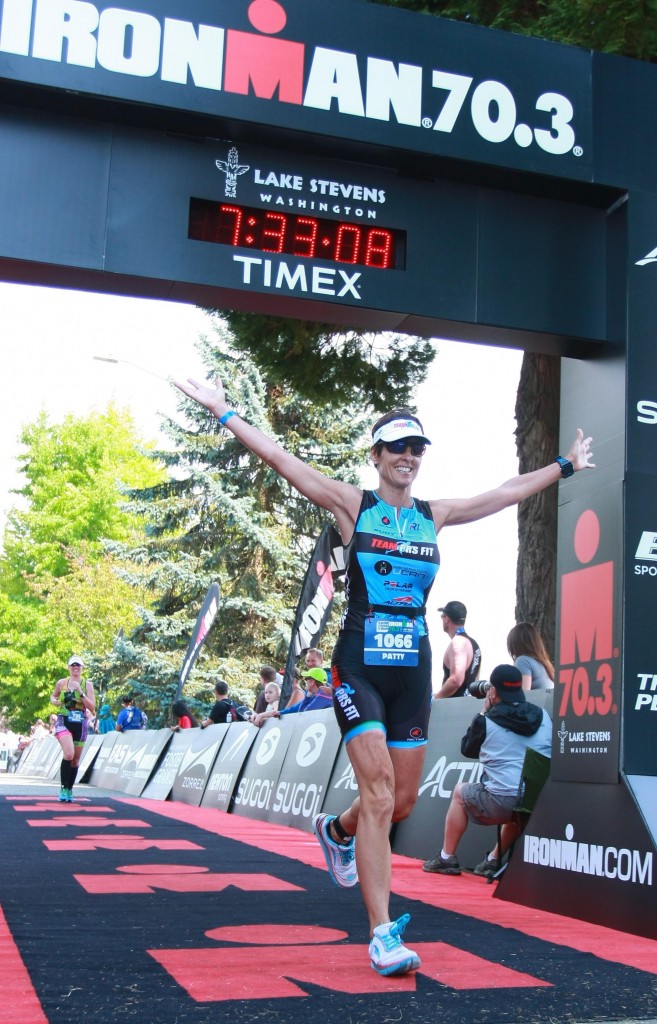 My official time was 6:41:10. I did it. I will never forget it. As soon as this photo was taken, I immediately collapsed into the fetal position, laughing, groaning with pain, and shaking with excitement. It took a volunteer about 5 full minutes (at least it seemed that long) to get me upright. She thought I needed medical attention, but I kept telling her, NO, it’s just a stitch. LOL, worst one I’ve ever had, but who cares????

Jeff greeted me with the biggest smile, hug, and “I’m so proud of you” and we laughed, and I reveled in my accomplishment. I did it. It wasn’t pretty, but I did it. I gotta tell you, having the support of my coach, SheriAnne Nelson of PrsFit, and of Jeff Kline, I believe I can do ANYTHING. 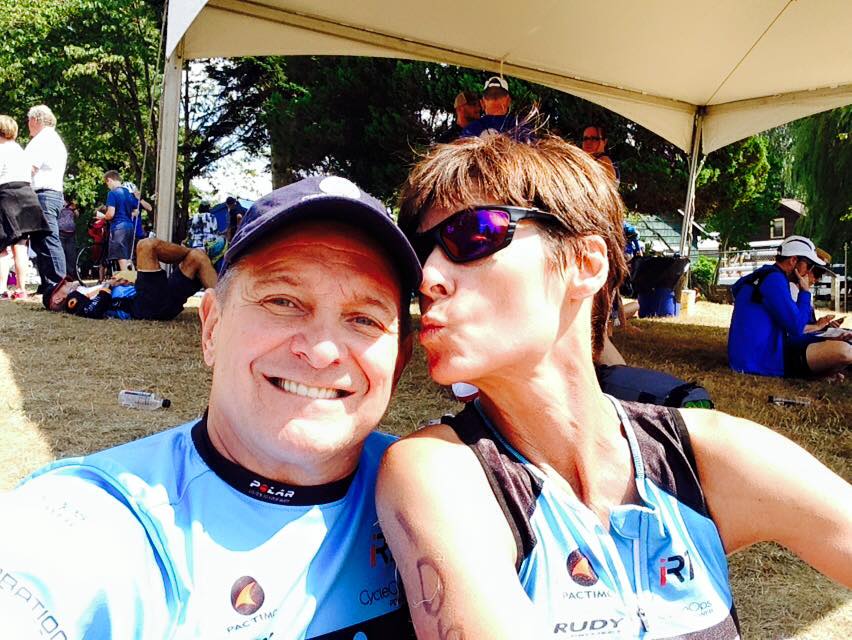 Life is good with this kind of love. Rock on, people. Go after your goals. It’s never too late. Thinking of starting on your own fitness path? Would you like to do a race someday? Ask me anything you want. I’d love to help and support YOU.