What an interesting weekend. Several days ago, I was basking in the afterglow of seeing several of my “team mates” conquer an assortment of races across the country. I got  caught up in their victories, trials, struggles, and achievements, and found myself desperately seeking the adrenaline high’s they were experiencing. What can I say, I’m a lemming.

I went online and found a Triathlon nearby in Eugene, Oregon. This race offered a Sprint distance with a 700m open water swim, 14 mile bike ride, and a 5K run. I have been training in open water for the past few weeks and thought it might be a good idea to do this one for a trial run, in preparation for my Sprint Tri in Montauk, New York in September. I immediately signed up and booked a hotel room for the night before. I sent a Facebook message to my coach telling him that I put a Sprint Tri on my calendar for the following Sunday, and his response was: “Ugh”. Hmm, this concerned me. He doesn’t like when I throw things at him that are not in our plan. After three months working with me, I thought he would be used to this by now.

So, good coach that he is, he adjusted my workouts and we both pushed on. I was feeling in good spirits until a few days before the race when I received the email that said:

“The swim segment of Triathlon Eugene has been cancelled. The race will convert to a run-bike-run configuration. Working Friday afternoon with the Oregon Health Authority and Lane County Parks, and after reviewing data compiled during the week, Pacific Sports has made the decision that it is in the best interests of the participants to eliminate the swim portion of the course. We will be announcing the final details and course by Saturday afternoon once we have an opportunity to establish the course and coordinate with the timing company. The Olympic distance first-segment run is 5K and the Sprint distance is 2.5K.”

While I am very happy that Pacific Sports decided that exposing participants to God knows what kind of algae, I was, nevertheless, disappointed. The event website was very clear from the beginning: There would be no refunds or transfer of registration, under any circumstance. Well, this was just great. Here I was, preparing for and stressing out for an event that wasn’t going to be the “real deal”. I was signed up to drive two hours,  spend money on a hotel room, and participate in a triathlon that wasn’t a triathlon, and there was nothing I could do to get my money back. Being the “adventurer” that I am, I decided to go through with it.

The packet pick up was at a CrossFit club in Eugene. While I don’t do CrossFit per se, nor do I have any objection to it, I do have one question: Do they purposefully make these clubs filthy and disgusting? I wanted to get a Tetanus shot after spending 20 minutes in the place. Whatever. Be tough, be a bad-ass, but at least make it sanitary.

While at the pick up, I stood for 10 minutes before anyone helped me, and there was only one other athlete there signing in. I was tired from my drive, so I didn’t speak up, I just kept smiling at the volunteers and hoping they would help me. (Totally disorganized) I managed to get my bib and bag, and was temporarily perplexed when they asked me what color swim cap I wanted. I laughed and said, “Oh, I’ll take the purple one, even though it’s not really a Tri anymore.” The volunteer looked at me and said, “Yes it is. You’re doing three legs.” Oh my! With a chuckle, I went back to my car and headed to my hotel.

I arrived at the Red Lion, (and I must admit, my attitude was less than perky) to find the  Hotel Display sign as follows:

Do we really want the stoned out people of Eugene, Or carrying?

My hotel room was actually pretty good and I felt great settling in. I drove out to the triathlon location to do a little trial run and ride, just to get familiar with the place, and ended up pretty much getting lost. The event website wasn’t exactly clear on the location of the start! I drove to three different parking lots before I found the right one. My nerves were starting to get to me, but I ended up having a nice little run and trial ride for about a half hour. The streets were wide, and the hills seemed to be manageable. All was good in my world.

Look how confident and happy I am in my new short haircut!

The next morning, I got to the start early enough that I secured a great parking space, got checked in, and had time for several bathroom trips and about 1/2 hour of a warm up. I wasn’t too keen on doing the 1.5 ish mile first leg, in lieu of the swim, but I had no choice.

When the starting horn went off, I ran like crazy. I was determined to get this first segment over with as soon as possible. I am NOT a fast runner and I am certainly not a sprinter, but I knew this race was going to be set up during this first segment. I ran 8:18 minute miles for the 1.5k, which was pretty good for me, and hopped on the bike to do my 14 miles. I was NOT prepared for the hills! Holy MOTHER, they were tough! I said more than a few bad words in the first half of the bike ride, wondering why in God’s name I chose to do this, until I finally got a hold of my nerves and just RODE LIKE HELL! Several elite type cyclists passed me as well as some “regular” people, and each time, we shouted encouragements to each other. That was pretty cool.  The scenery was gorgeous and the volunteers were fantastic. Just about the time I was heading back into the transition area, it started to rain slightly.

I bounded off my bike, determined to finish strong and sprinted out for the 5k run. My legs were numb and my lungs were heaving by this time, but I managed to keep up a good pace. About halfway through my run, the skies opened up and it just poured. I thoroughly enjoyed the rain, until it was coming down so hard that it was streaming down my face. Thankfully, it was a warm day. When I saw the finish line, I tried to give it more gas, but realized I was already at capacity. I finished strong and with a huge smile on my face. I also let out a few loud “WOOHOO’s” and “YEAH!’s”. 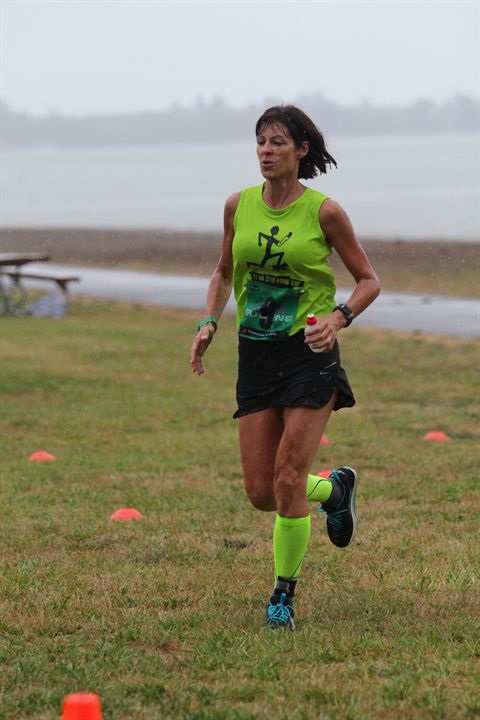 Can you see that rain???

By now, the rain was coming down in sheets. It was ridiculous! I quickly changed into my dry clothes and full rain gear and went back to check on the results and cheer on the other finishers. To my complete shock, I found out I had gotten 2nd in my age group and 12th overall female finisher. SERIOUSLY? WOW, I was stoked!

OK, I admit it. I took off my rain gear to pose for this one.

Shortly after this photo was taken the shivering commenced and I decided to go back to the hotel and take a hot shower. I had a 2 hour drive to make and I was pretty beat.

This event turned out to be a fun time, despite all the weird twists and turns leading up to it. Would I do it again? No. Not this one. I’d prefer a more organized event. I hope my next one is better run and there’s no algae to ruin the swim. We shall see….in about 3 weeks. Stay tuned.

Have you done a triathlon? Ever thought of one?