Unless it’s a high profile event where a group of my friends is planning to race together, or I have a family member participating,I prefer to race alone. This might surprise some of my readers, because in reality, I love a crowd, and the bigger the party, the better.In my non athletic life, I can’t imagine not being surrounded by friends and family.

My ugly secret is that I experience high levels of stress with my training and racing. Supernova type stress! On race day, I am usually one  panic attack away from needing a couple of Valium and a whole bottle of Kaopectate. I know it makes no sense, but I can rarely avoid the pre dawn hours pacing the house, making frequent trips to the Loo, always praying I’ll settle down. It doesn’t matter how well prepared I am, or how well my training has gone. Last Sunday was no exception.

I am a beginner Triathlete. Technically I might be an intermediate, but I don’t want to set any expectations. I’ve done four Sprint Triathlons, so far. Sunday, June 22nd was my fourth, to be exact. While they have all been fun and exciting, this one ended up being very special. I have been training all Winter and Spring, but these past few months have given me a wee bit of a challenge. Running isn’t smooth like it used to be. Cycling seems to have gotten harder too. My swim workouts in the pool have gone well, but I’ve only recently had the chance to get out in the river and do open water workouts. Have I mentioned my fear of cold open water? Plus, that shit’s COLD! And murky, and filled with floaty things, and gucky stuff on the bottom! 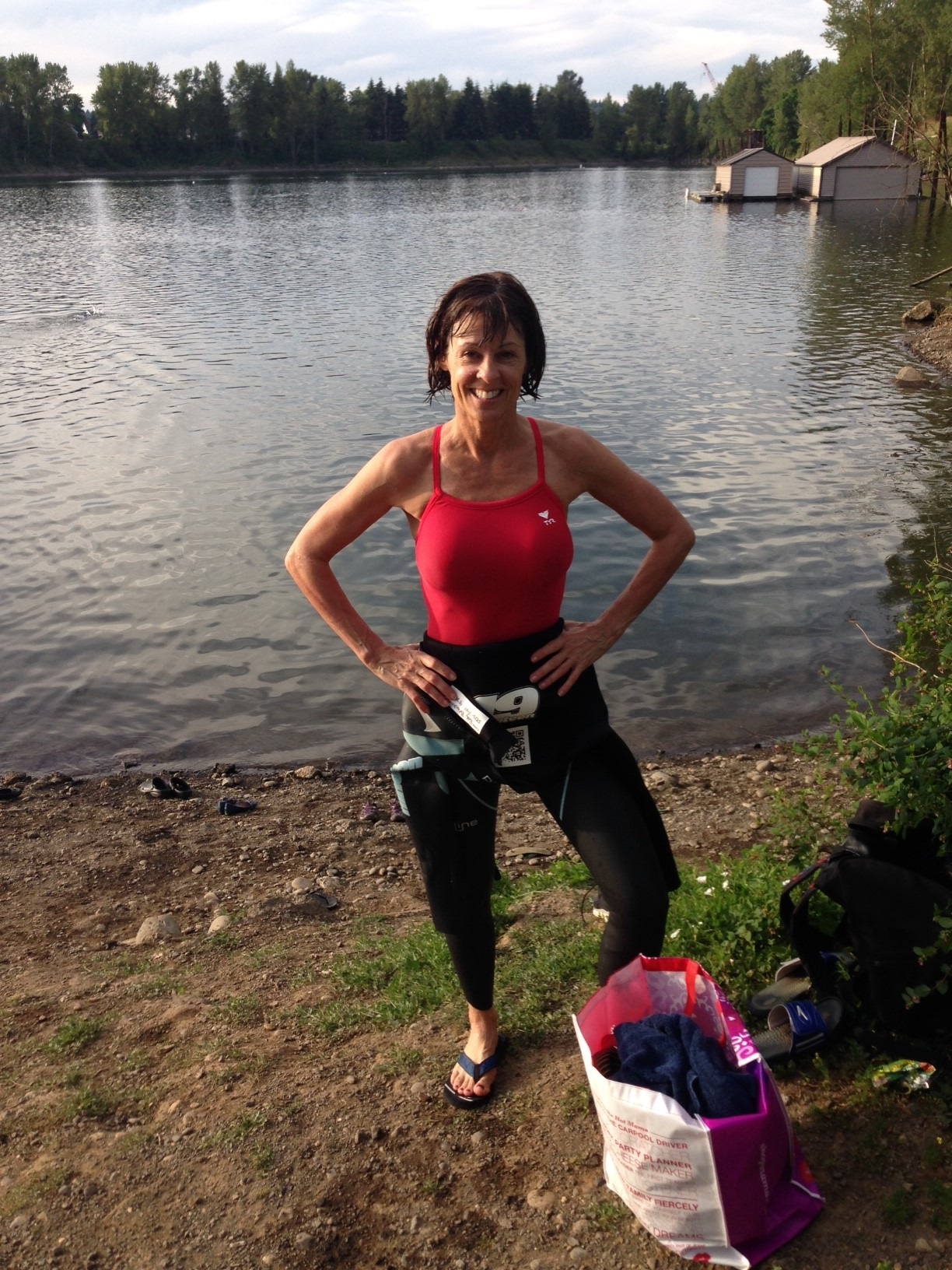 Don’t let the smile fool you

All of these things don’t matter, however, when the calendar shows you signed up for a race. So, Sunday morning, I got up early, (Did I REALLY sleep at all?) ate my customary breakfast, and waited for the nerves to die down. On this day, I was to compete in the Clackamas Cove Triathlon. A short 10 minute drive down 99E and I was there.

It’s important to overdress for a triathlon. It keeps you warm and calms the nerves.

I love small races of any kind. They are usually pretty well organized and people are friendly and helpful. The Portland Triathlon Club sponsored this event and they did a fantastic job. I arrived with plenty of time to spare, set up my bike and transition area, and visited the rest rooms a half a dozen times. 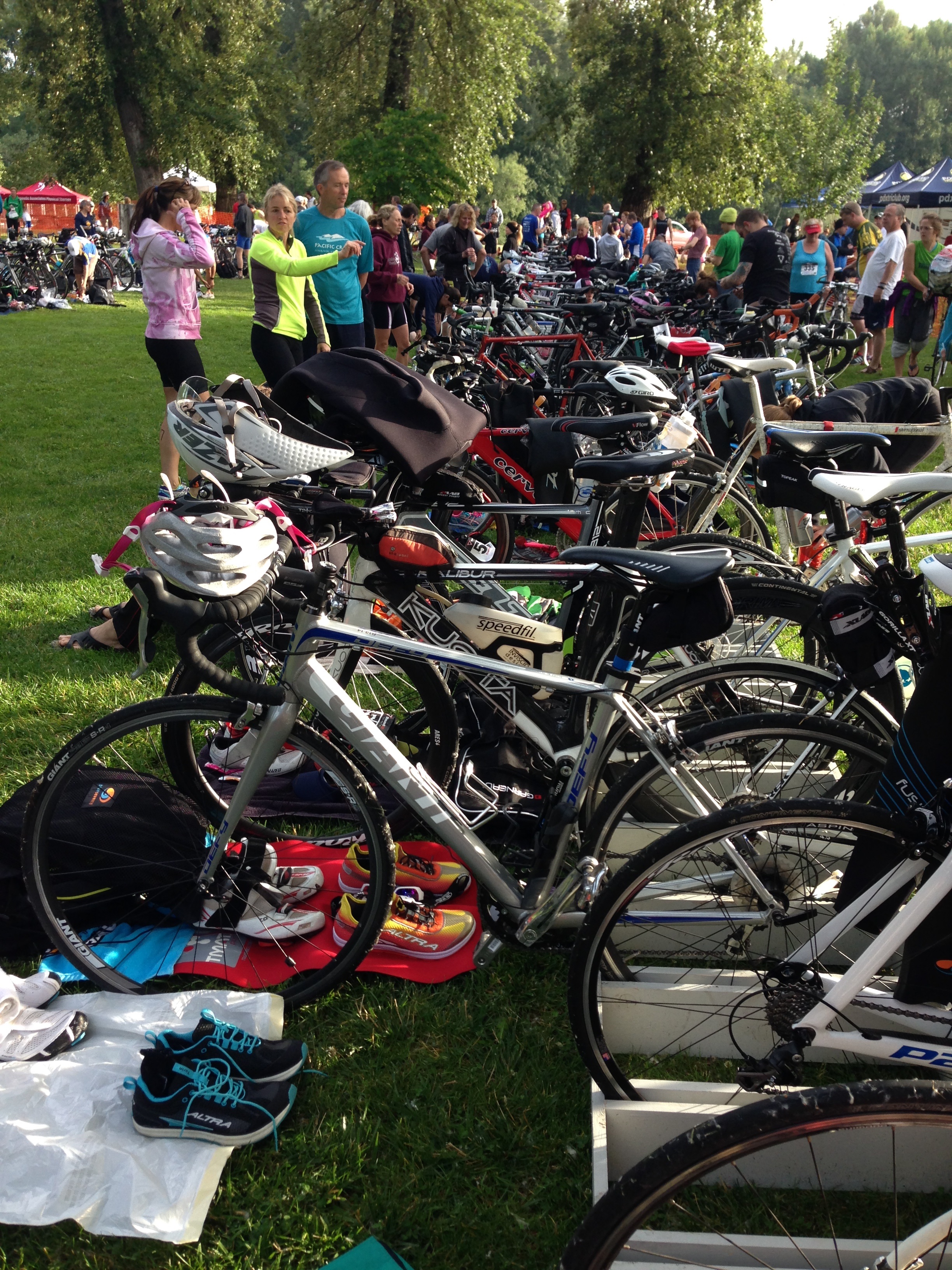 I like to set my bike up as close to the exit as possible.

Once set up, and with about forty five minutes to go, I drank my GenUcan chocolate protein shake, made with Coconut milk and a banana.

Come on, energy! Let’s do this thing.

The call went out for the athletes to make their way to the starting point of the swim, which was a five minute walk down the street, along a paved bike path, to the beach. I donned my wetsuit, grabbed my goggles, neoprene cap, and designated green bathing cap, took a good hit off my inhaler, and headed off. At the last minute, I decided to put on my swim booties instead of shoes, knowing that it might cause me to lose time in the first transition (T1), but did I mention the yuk factor of the river bottom? I was glad I had them.

The race started with waves, every thirty seconds or so. It went very quickly, and before I knew it, they called for the Old Bags to get in the water. I’m kidding about that of course, but really, when you are in the LAST age wave, what else would I call it?

The water was cold. I knew that. I was ready for it. According to the Oregon Water Scientist Center, the temperature in  the “Cove” section was around 63 degrees, but once you exit the spill into the Clackamas River, it droped to around 57 degrees. OK, that’s cold. Before my wave started, I did a few dives underwater to acclimate myself and see if I could  breathe with a relaxed rhythm.  It worked! Before I knew it, my 800m swim (Just under a half mile) had begun. I found myself in the middle of a pack, with people bumping me, kicking me, and swimming half up my legs, before I kicked THEM in an effort to tell them to “GET THE HELL OFF ME!” At one point I had someone in front of me going back and forth like she was trying to prevent me from passing her. This ticked me off, so I veered off to he left and gunned it.

Going through the “Spill” into the actual river was a shock. I knew it would be colder, but this hit me like a brick. Several people panicked here and couldn’t go on. After two or three seconds, I took it in stride and kicked up my pace. Now as I turned left  I could see the exit point. It got very shallow suddenly, and some people crawled along on their hands and knees. I knew that would slow me down, so I altered my stroke and flew through the shallows. I got to the exit rather quickly and ran up the ramp. My body was doing a bit of a slow motion run, which was hilarious, but given the fact that it was half frozen, I didn’t complain.

It was about a forty yard run to my bike, where I quickly removed my wetsuit attire, took another hit off my inhaler, put on my socks and bike shoes, sunglasses and helmet, grabbed my bike and ran for the exit., Once I mounted my bike, I held nothing back. It’s an interesting thing what happens to me on the bike. I am not sure who that woman is that inhabits my body, but I would never want to meet her in a dark alley. The ride was an out and back, with a total distance of twelve miles. No big deal…unless you are living it moment to moment. Trust me. No matter WHAT the distance, you feel every inch of it. I was fearless. I got up to twenty five mph on that freaking bike. I yelled, “ON YOUR LEFT” more times than I remember.  The psycho woman in my head screamed (silently of course) “YOU’RE MINE, ASSHOLE”,  as I dug deep and passed people.The sound of  my loud “grunting” alone must have scared the crap out of them.  I sailed into T2 and quickly grabbed my water bottle for the run.

3.1 miles seems like NOTHING. Unless you just sheared all the muscles in your legs riding your bike harder than you’ve ever ridden before. It’s actually pretty funny to see people hobble off the bike. I was no exception. My feet were completely numb. This has never happened before. I assumed they would eventually get feeling again, so I ran. And I ran. I ran close to my fasted 5k ever. It hurt. I passed people, and didn’t let anyone pass me. (except for one 15 year old boy). I finished with a sprint, and knew I had given my all.

Once I got my breathing back under control, I went over to get my results. It turned out it was my best triathlon, and I took second in my age group. I was thrilled beyond words. 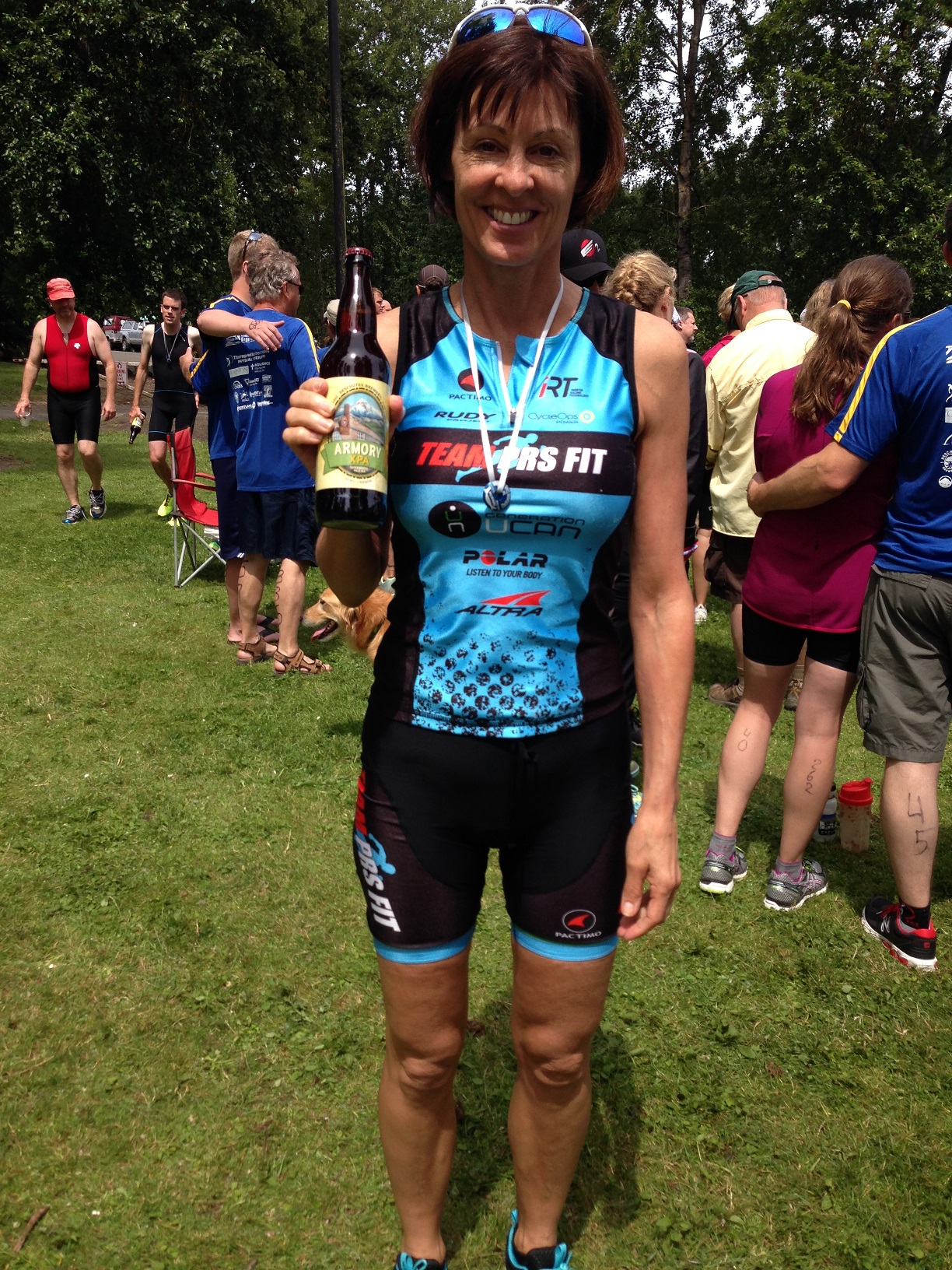 I hung around and cheered for the last of the athletes to finish and then went home to eat volumes of food and take a long nap. It was a great day. I hope to learn from this, and not be as stressed the next time. (One can hope, can’t she?)

Do you get nervous when you train or race? How do you calm yourself? I’d love to hear your thoughts. As always, thanks for stopping by.