My three kids all live out of state, and while it  is heart wrenching to spend every day without them, we find ways to stay connected.

Enter “game changer”, Charlie Belle. Nobody told me about the feeling of complete and total NEED to be physically WITH one’s grandchild. When you have a grand daughter that lives three thousand miles away, your heart aches for her every day. I wake up craving photos of her on Facebook, or maybe a video text of her doing something silly. I laugh. I cry. I buy plane tickets.

Recently, my daughter-THE MOTHER of this gift from Heaven itself, deviously ramped up the frequency of posts, texts, and Instagram pictures of #mygirlchuck. I had no choice but to  get my butt back to NY for some “Charlie-fix” Oh, yeah, and to see Dede and Evan too.

Since I am in training for another Ironman, I naturally  had to plan ahead for my workouts. No problem!  With a free pass the the YMCA, a sweet rental bike, and the Central Park Half Marathon, I was set.

I arrived on a Thursday evening and navigated the AirTran to the subway, and then walked the last several blocks to my daughter’s apartment. I have finally figured out the subway. Well, almost. I have the E and F trains nailed! I couldn’t wait to see the little monkey, so I practically ran to the apartment.

Charlie was awake and she was so gracious, she didn’t even object when I made her wear the Cabbage Patch hat I had bought for her.

Chuck is a great sport, and for the next 3 days, she put up with all of my smooches, cuddles, and squeals of delight. The weather in New York was perfect for getting out and seeing the sights. After my swim at the YMCA on Friday, Dede and I took the princess for a long walk around Manhattan. We met up with Evan after work and cut through Central Park on our way home. 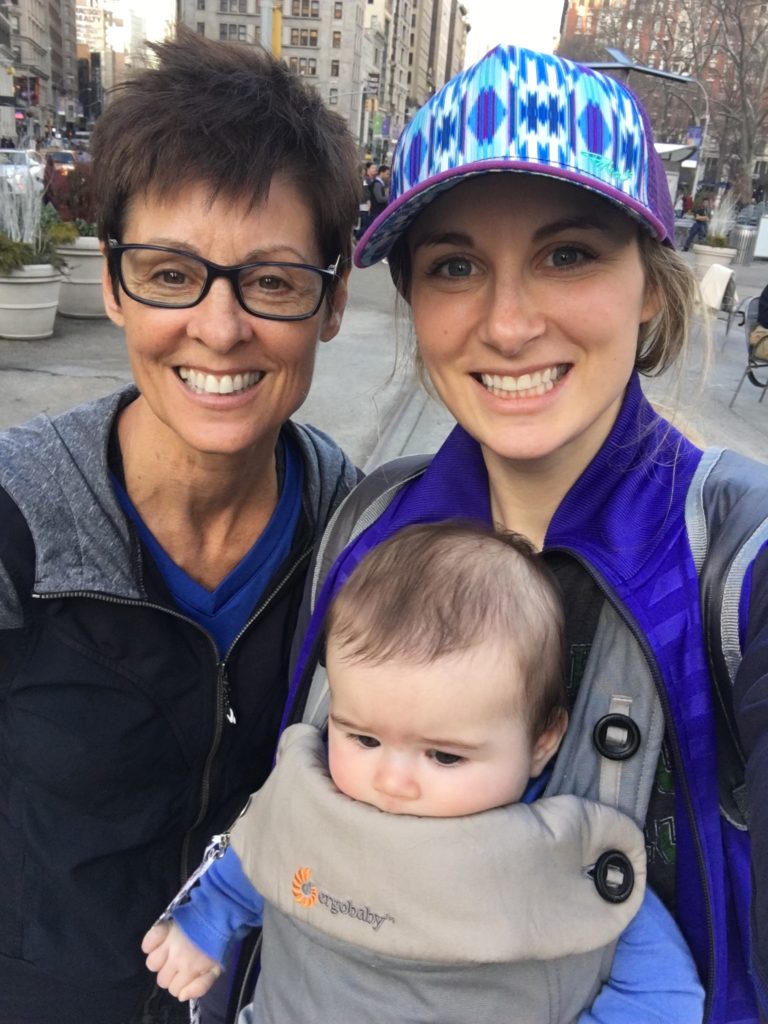 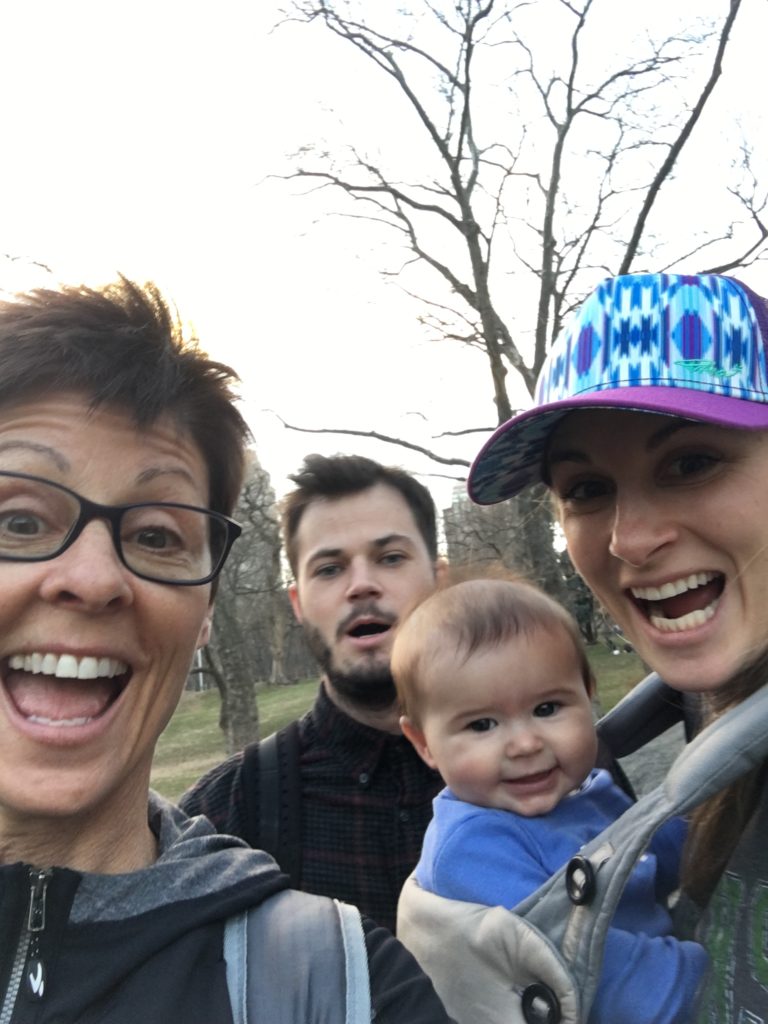 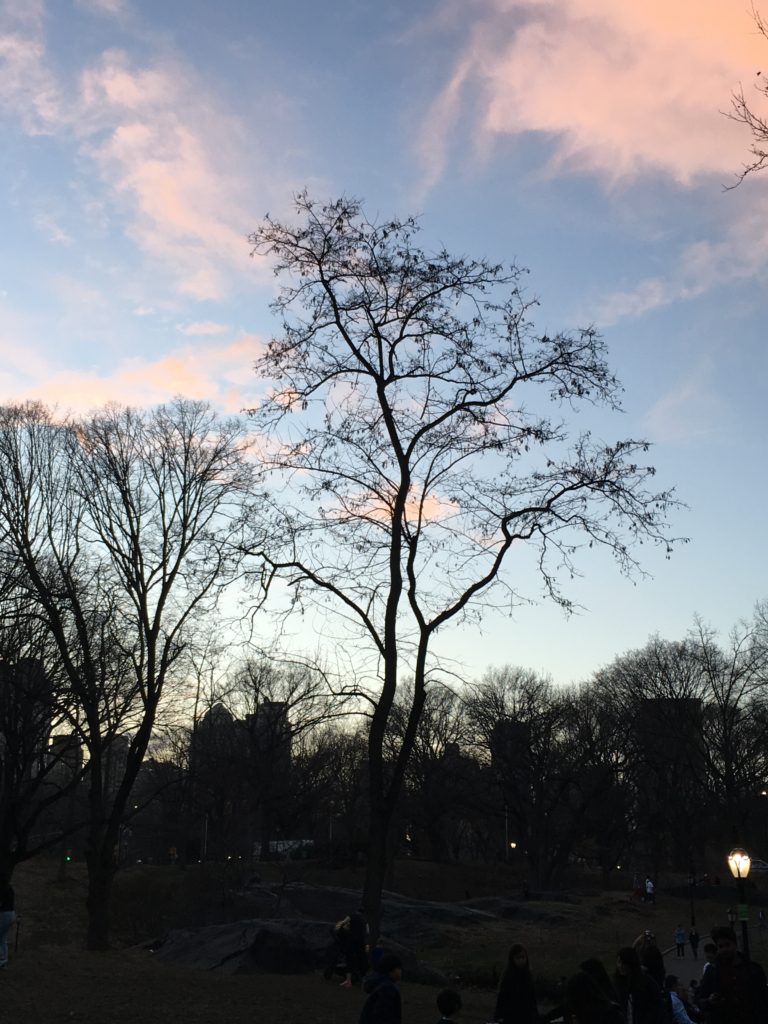 This is me taking artistic photos

Poor little Charlie was teething while granny was visiting, so she had a few rough nights. Two teeth in one week is a lot for a little girl!

Saturday morning was incredible. The sun came out and temps got up to almost sixty degrees.  I rented a great bike and went for a nice 32 mile bike ride along the Hudson River Greenway. 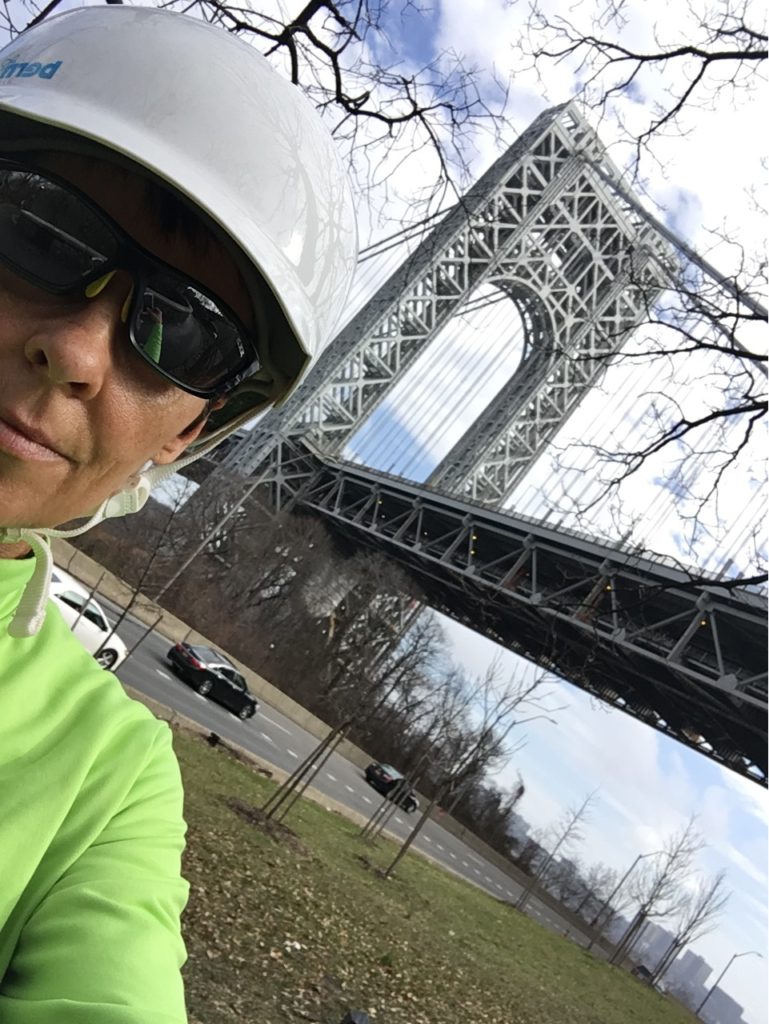 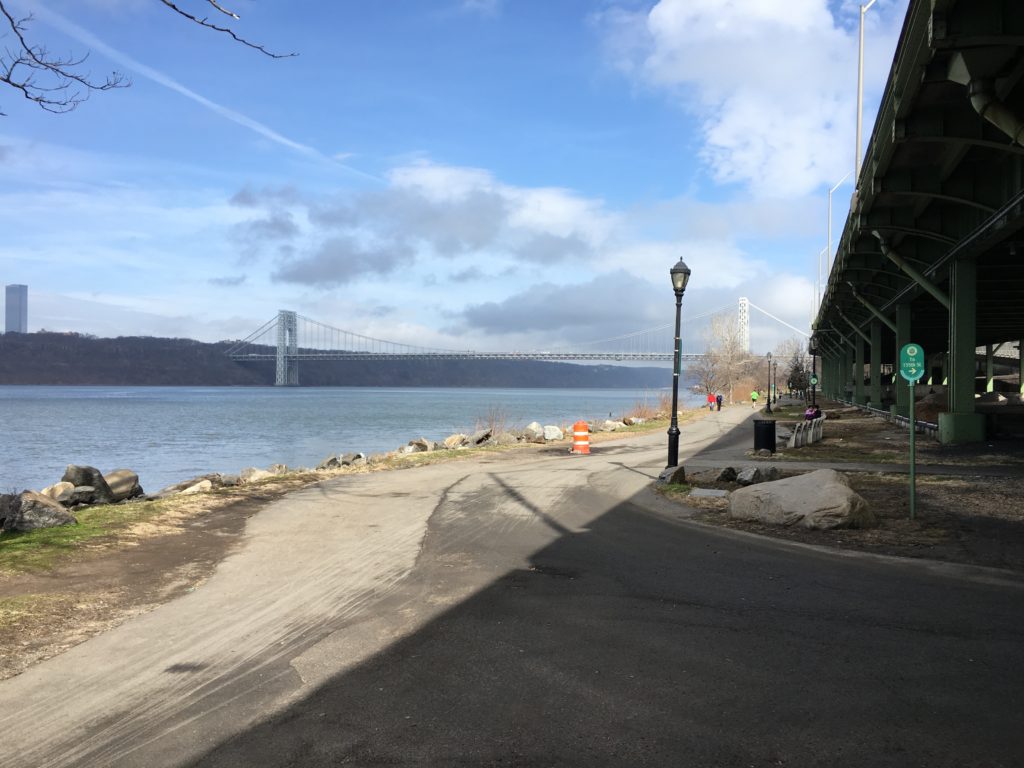 Riding a bike in New York is a little insane to say the least. Dodging taxis is a skill I never knew I needed. I’m fairly certain it is not one I hope to use often.

After my ride, and a much needed shower, Dede, Charlie and I walked to a place called Sweetgreen. OH MY FREAKING WORD!!! I ordered something called Spicy Sabzi, a cavernous bowl of spinach, kale, broccoli, raw beets, carrots, sprouts, basil, roasted tofu, quinoa, and some spicy dressing. I think it weighed 7 pounds. I ate the entire bowl. Burp.

We walked around for another hour or so, and then I decided I should get back, put my feet up, and rest for my half marathon the next morning. The weather report called for a chilly morning, so just to be on the safe side, we ducked into a Goodwill store, to buy a “throw-away” jacket, to get me through the start of the race. I would ditch it sometime early in the race.

The balmy weather changed overnight. Just my luck. I awoke to sub freezing temperatures and up to twenty five mph winds. Hahhaa, really? I did my normal morning routine-breakfast of hot tea, a banana with peanut butter and shredded coconut. The wheelbarrow of kale and raw veggies I had for lunch the day before started to feel like a bad idea. Let’s just say, I waited until the last minute to call an Uber.

I got dropped off on the West side of Central Park at W 96th. SWEET JESUS it was freaking COLD! Frost bite cold, and windy as ever. There was nowhere to hide from the arctic blast. People were gathering and jumping up and down, trying to keep warm. Where were the bathrooms? How can you have a race without porta potties???? I was told to walk North and I’d find them. They were about a half a mile away. The lines were typical for a race, and I feared being late for the starting gun. No worries, I made it in plenty of time. Gathering in a crowd with a few thousand people was the best part of the morning so far. At least in the pack, it got warmer! Thank God for Goodwill and the extra layer of HUGE men’s fleece that I bought. 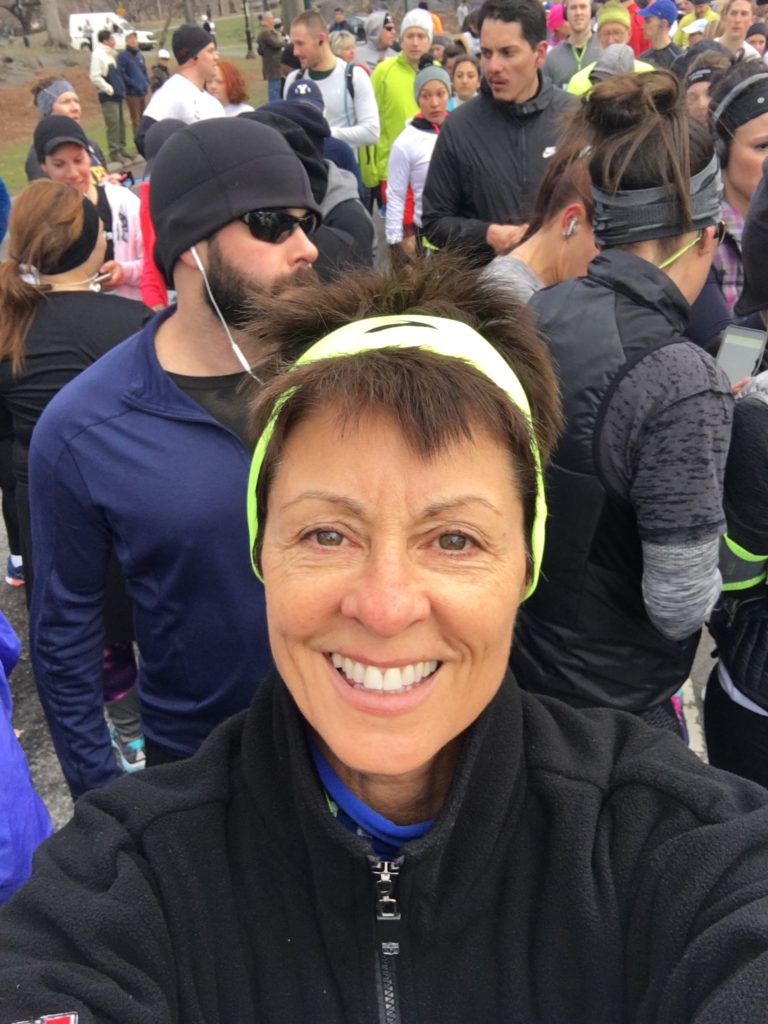 Frostbite and a grimace for you

9am and we were off. I felt great! I guess Ironman training IS working. The West side of the park is the hilliest and that’s also where the wind was the strongest. This race course went 2.5 times around the upper end of the park, so we ran up  Harlem Hill twice. It’s a killer. The first lap was great except that at around mile two, the kale memory started to get stronger. Um. I’m a coach. I know better than to eat ninety seven pounds of  roughage the day before a race. I thought about a port potty stop, but the lines were long and I was making good time.  Passed another bathroom a mile later, but thought I could hang on. The third bathroom that I saw, I actually pulled over and got in line. Twenty seconds later, I abandoned the line and started running again. “I can hold on for another eight miles!” HELL no I can’t. Unfortunately, there were no more bathrooms until mile 8 or 9, so by the time I had no choice to but to stop, I was doubled over. SIX minutes of wait time before I got to enter the potty. I think I was in there for another six. Mother of MERCY!

I exited victoriously and got back in the race. Now I was freezing again, after having such a long break. I still had that ugly black jacket on, and was grateful for it! The rest of the race was non eventful, but overall, I felt pretty good. I worked hard and finished strong. Dede and Charlie were there to cheer me on at the finish line. 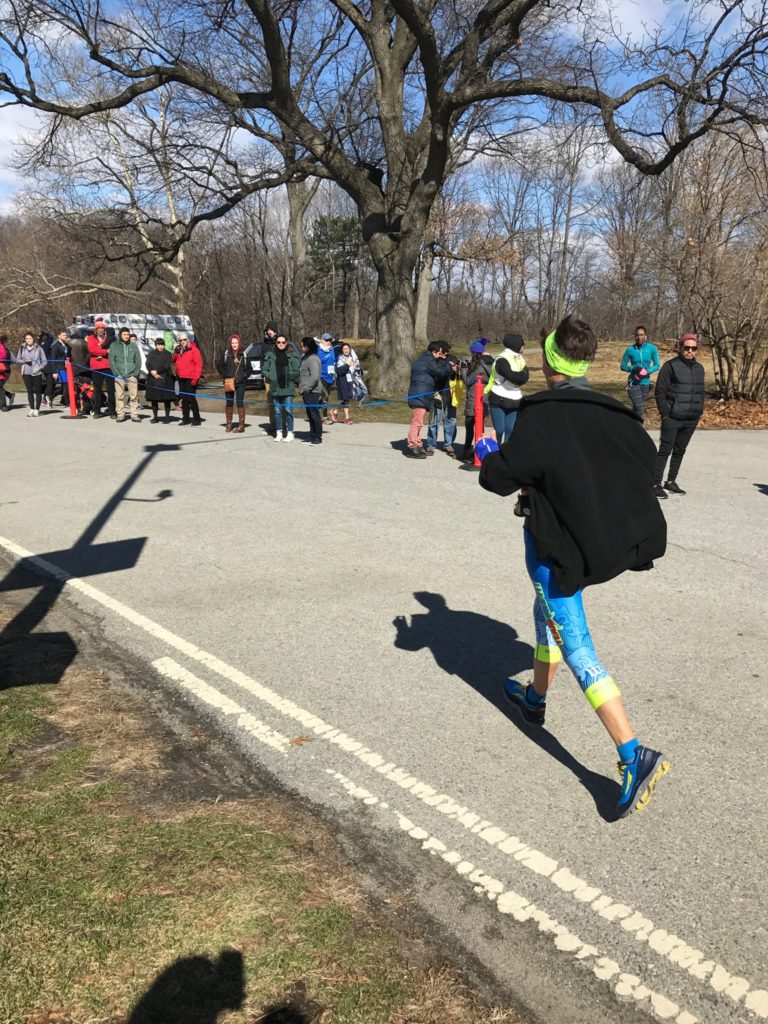 I opened the coat so my bib number would show and they could call my name at the finish. Vanity, I know.

Dede had dry clothes for me and we started walking home, looking for a place for me to change. I started shivering like crazy and finally I went into a hospital to get into warm, dry clothes. We walked back to the apartment, which is another mile and a half. Long day!

My sister Terie arrived in the afternoon, and all of us went out to a gluten free Italian restaurant called Senza Gluten that was incredible beyond words. Charlie even sat in a high chair for the first time! 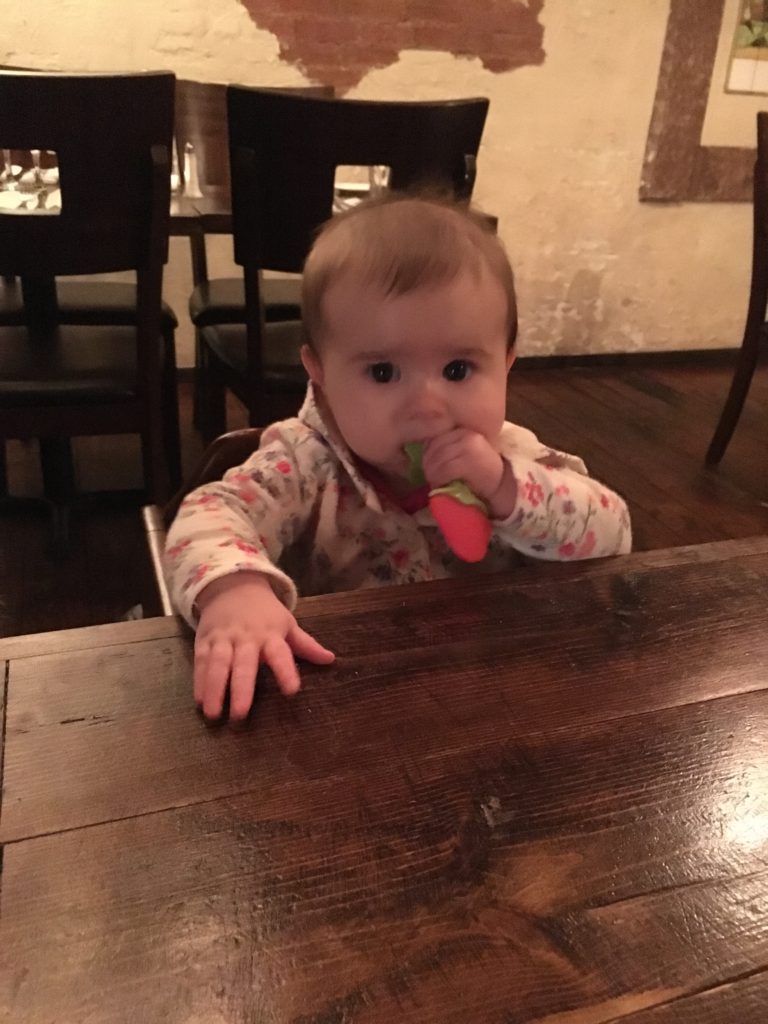 Can’t get enough of this kid

The trip was molto bene. I flew home Monday morning, without any problems, and made lots of memories to hold me over until the next trip. Kids are awesome. Grand kids are the bomb. Life is good.