To convey what went through my mind as I ran my bike out of transition, is as easy as it would be to  describe how someone would drink an ocean. One sip at a time? There was an urgency, yet there wasn’t. This was going to take HOURS, so how would I manage that urgency? For reasons mentioned in previous blogs, and more, I hadn’t ridden more than 75 miles in my training cycle. On my new bike, only 30. I didn’t know what was to come, other than the distance. Ironman bike distance is 112 miles. Chattanooga Ironman is 116. Maybe that makes this an “Ultra-Ironman”.

After mounting my bike, I hit the button on my Garmin, and it should have switched to the cycling mode, but it didn’t. I’m so OCD that it drove me crazy to think it wouldn’t track correctly, so for the first mile, I screwed around with the damned thing, ultimately deciding to close down the “triathlon” mode and switch to the “bike” mode. Sure, I lost some time, but at least I got it to work, and then I forgot about it. I put my head down and pedaled on. The first part of the race consisted of a few hills, and several turns, as we made our way out of the neighborhood, and out onto the open road. My bike felt good, and I settled in for a day of sight seeing. Several people gave me advice before I attempted this, my FIRST Ironman. Most of the advice went like this: “Relax and enjoy the experience. Take in every sight and sound, and don’t stress on your time. Just stay in the moment…” I thought I would do that exact thing…..until about mile 5. It was at that time that I sensed the “other Patty” come to life. You might know her. Fiercely competitive. Wickedly insane when she races. Is commonly seen yelling and singing at the top of her lungs while racing. Yeah, that’s the one.  “Sister, if you don’t leave it all out here, you will be ashamed of yourself, and beat yourself up for the rest of your life! Get your ass MOVING.” So I did. I didn’t give a crap if I dropped dead. 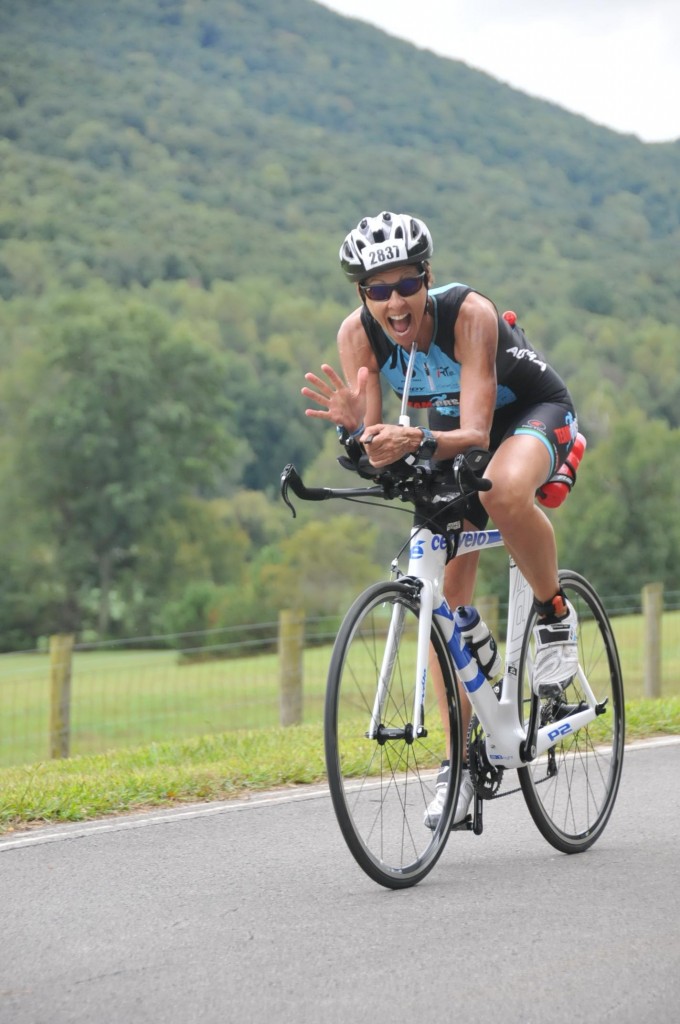 The course is  11 miles out, a 47 mile loop that you ride twice, and then 11 miles back into town. There is a 4400′ total elevation gain. My first 50 miles, I averaged 18.41 Mph. the first 30 were mostly uphill. I don’t know how I held that pace up some of those hills, but I did, and I was maniacally happy. I played leap frog with a few cyclists and got frustrated with a few more. At one point, I called out to a guy blocking the passing lane, and I think I scared him. I never saw him again.  I hated seeing people in front of me! The second half of the loop is all rollers. When I say rollers, I mean steep, out of your seat on the way up, and short not so steep on the way down. The downhills were never long enough to give you a good recovery. Her’s what it looked like:

Oh sure, the hills look small when spread out like this.

I remember as I  struggled up a long, relentless hill,  thinking, “Oh God, this is gonna suck the next time around.” I’m pretty sure I shouted that out to a few people as I powered passed them on the way up. I stuck with my nutrition plan, alternating between GenUcan and Cliff Bar Organic Energy food packets. I also had Base Performance Salt in a vial that I tucked into my cycling shorts, and took hits off of that periodically. I took in an average of 110 calories per hour. Everything worked like a charm.

The on-course support was over the top. Volunteers and spectators kept our spirits up, and while I didn’t partake in anything from the aid stations, I made sure to smile and thank everyone as I sped by.

The Special Needs stop was at around mile 56 in the historic town of  Chickamauga. People were EVERYWHERE, cheering us on. The efficiency of the volunteers, with calling out our numbers, and directing us to our bags, stunned me. Within seconds after entering the area, a volunteer handed me my bag. I had a brilliant idea of filling it with Fritos Corn Chips and ice tea. The crunch of the salty chips was Heavenly after only consuming liquid and gel-like food all day. The ice tea gave me a nice caffeine boost. I shoved as much as I could handle down my throat and tried not to stop for too long. In minutes I was off again, fueled and ready for another lap. As it turns out, I made a second stop at the next aid station, to use the porta potties. As much as I don’t object to peeing on the bike, I just didn’t want to and quite frankly, felt the need to get off the bike and stretch the legs a bit. There was a line, so I lost some time here. The athlete tracker shows that between mile 50 and 75, I had slowed to 14.86 mph. Stopping does make a difference! I got a little tired at this point too, as the hills were starting to hurt. 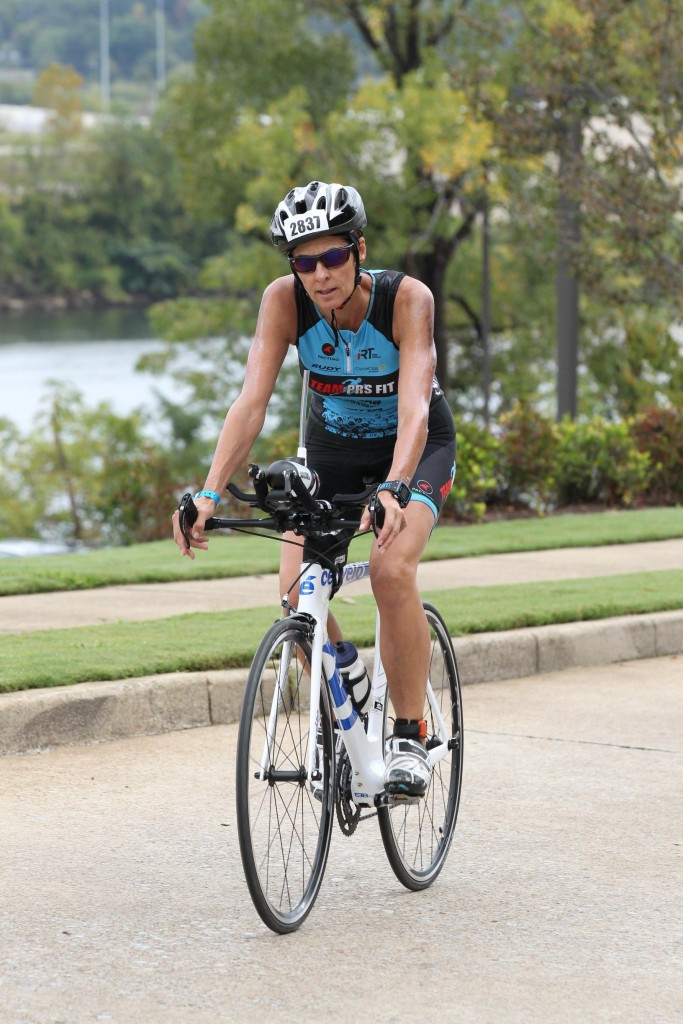 Why are you taking my picture?

I got a second wind and between miles 75 and 97, I averaged 20.12 mph. I did the second loop and never even noticed that big hill I was worried about! At mile 100, I started experiencing pain in my left knee. Deep, sharp pain. It came out of nowhere, but it had happened at Lake Stevens 70.3, and I was not looking forward to the next 16 miles. I made sure to press my knees in tight to the bike, to take pressure off of the IT band. “One more hour” I kept repeating to myself. OUCH! Oh man, at mile 110 the knee AND foot were now in terrible pain. I had to stop using the muscles in my left leg, and only pedal with my right leg several times, just to give it a break. “Where did this wind come from? Oh God, it’s hot. For Heaven’s sake, I don’t remember this road being so long on the way out!!! WHERE is the freaking finish?” I wasn’t really discouraged though, because I knew I was near the end of the course, and the pain would stop as soon as I got off the bike.

Coming into transition, I dismounted and handed my bike off to a volunteer. Let me tell you, there really is no sane reason to sit on a bike for 116 miles! Time 6:46:22.

As I ran through the transition area, I saw my kids!!! They were yelling and smiling, and jumping up and down. I was on top of the world again. 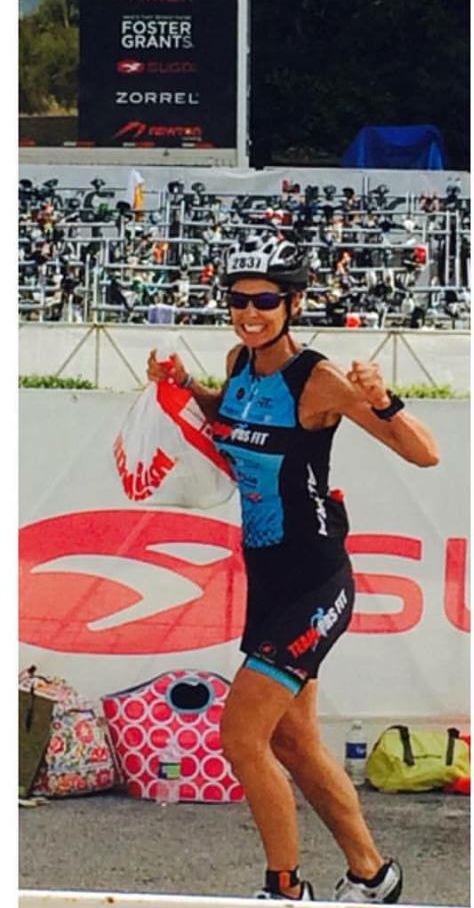 Heading into the tent to change for the run.

I only had a marathon to run, to earn the title “Ironman”, and nothing would stop me from doing that today!

6 thoughts on “Ironman. It happened. Part 3”