If you have followed my blog, you know that I planned to compete in  Ironman Arizona 2016.  IMAZ registration, like many IM races usually sells out within minutes of  opening, but if you volunteer, you get a guaranteed spot at early registration. I signed up to volunteer this year. Jeff was doing THIS year’s race, and I wanted to be there to support him. Phoenix is  where Jeff’s business partner, and my  coach lives, so we all planned on spending time together. I was scheduled to fly in Saturday, volunteer Sunday, register Monday morning, and fly out that night. Jeff would be there for a week, to also conduct some business.

I arrived  excited about the race, but also excited about visiting my alma mater, ASU. The hotel where we stayed was just a few blocks from campus. Jeff and I met at the hotel, walked down to the athlete’s village,  enjoyed seeing people we knew, and checked out the vendors. Then we went back to the hotel so he could rest and make final preparations for his race. It was fun NOT competing, and watching someone else stress out for a change. Pre race jitters are normal!

We had a nice dinner with  team mate Jerry and went to bed early, after setting the alarm for 4am. Jeff woke up at 3:30 and quietly got  ready. We left the hotel around 5am. It was chilly-in the low 50’s and the water temperature promised to be in the low 60’s. The forecast was for mid 60’s and possibly a shower or two starting around 7pm. Perfect racing weather! Jeff checked in and put on his timing chip. 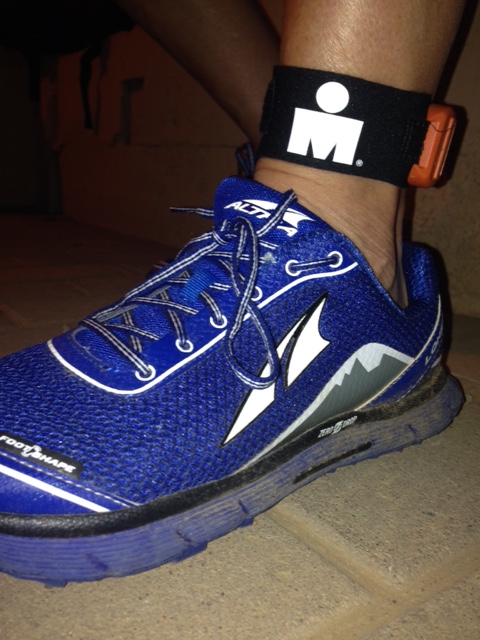 Before we knew it, they called for the athletes to line up. 2600+ wetsuit clad people headed for the swim start, and we said our final “good luck’s” and exchanged  hugs and kisses. 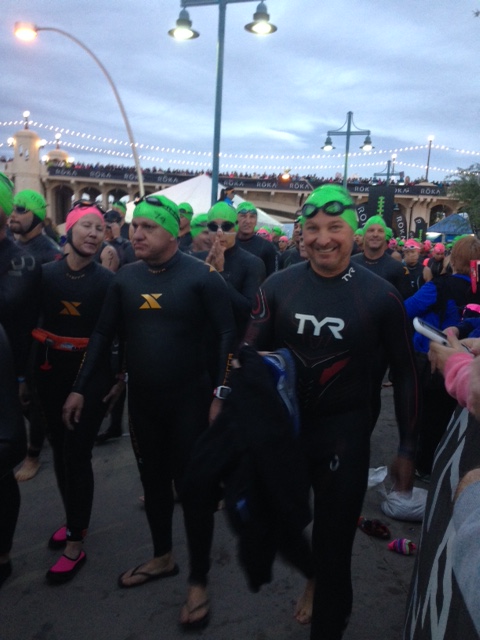 Seconds before the start and ready to crush it.

Once Jeff got in the water, SheriAnne, two of her kids, Jerry, and I went to the hospitality tent for some breakfast. Jeff hoped to complete the swim in 1:40. At about 1:15, we all walked over to the bike area, where we could watch cyclists start their 112 miles, AND see swimmers enter the transition area. It was colder  now, a little windy, and threatened to rain. We cheered on the cyclists and chatted happily, waiting to see Jeff running to transition. Once his “planned” finish time past, we started getting nervous. Ironman allows 2:20 to complete the swim or you get your timing chip taken from you, and you are listed as a DNF. (Did not finish) I couldn’t believe we hadn’t seen Jeff at the 2:00 mark. By 2:10, I ran to see if his bike was still in the transition area, thinking we might have missed him. Sadly, it was still there. My heart sank. How was this possible? A few more minutes and the cut off time passed. Jeff didn’t make it. Now I was worried. We all were. We went over to the swim exit in time to hear his name called as being one of the last to exit the water. He looked horrible. SheriAnne said he was pissed, but I saw something else. His face had a grayish black pallor. When he met up with us outside of transition, he explained what happened.

Upon entering the lake, and feeling fine, he swam out to the open water and started swimming steadily. 800 yards later, his heart rate suddenly spiked and he couldn’t breath. His chest felt constricted. He flipped over onto his back to rest for several minutes, and try to calm things down. He settled finally and tried swimming again,   and made it to the turn around with plenty of time to finish. When he had 300 yards to go, it happened again. Vertigo, nausea, difficulty breathing. He had to stop again, and get under control. Finally, he was able to finish and exit the water. He was more angry than I’ve ever seen, and “humiliated” in his words.

After a few minutes of rest, he started feeling horrible again. He managed to get to a trash can before spilling the contents of his stomach. His dizziness continued and we stayed in the park for several more minutes. Once he felt well enough to stand, we went back to the hotel, he showered, and decided to try and eat. After lunch, he mentioned that he still felt dizzy, his chest was tight, and he had tingling in both arms. I text my daughters, (both nurses) and they recommended that he return to the medical tent to get checked out. Once in the tent, after taking Jeff’s history (which included his current stage 4 Prostate cancer) they determined he needed to go straight to the hospital. 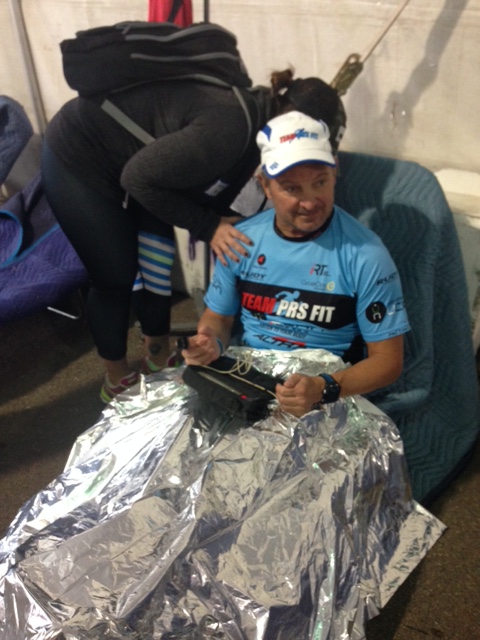 Getting checked out by the medical volunteers

Off to the hospital with a thumbs up from SheriAnne

He wouldn’t let me come with him and insisted that I go ahead and do my 5 hours of volunteering. SheriAnne followed in her car and promised updates.

By the time I got to my station-the run “Special Needs” area, the rain was coming down in sheets. 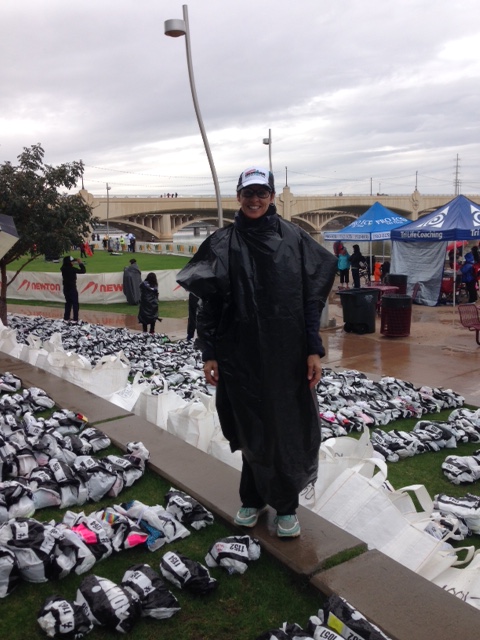 We wore black lawn and leaf bags for most of the day.

I spent the next several hours texting with SheriAnne as I helped runners try not to freeze to death. The rain was relentless and I saw numerous cases of hypothermia. Those poor people!

Jeff was tested for arterial blockage and the levels of Troponin were significant enough to require him to stay overnight for further observation. I called the airline and changed my flight.

Bright and early Monday morning, after ZERO sleep the night before, I arrived at the registration tent and paid the $740 to register for 2016!

While waiting for the new tests, I needed to burn off some steam, so I went for a run around ASU. Wow, it sure has changed in 35 years.

I hardly recognized anything!

I did, however find the apartment building that my cousin and I lived in while we were there. Oh, the memories! 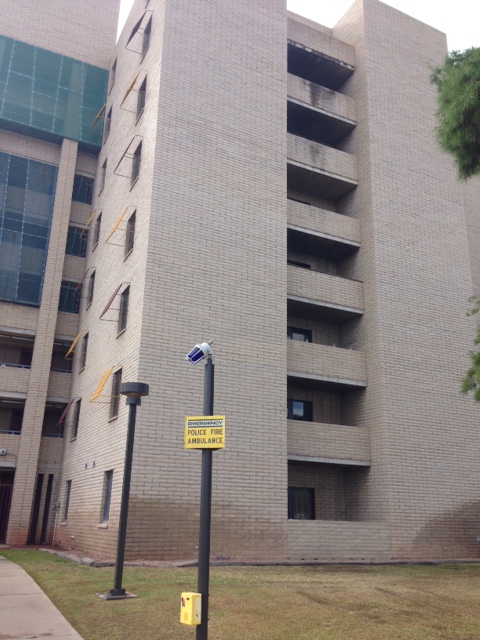 By mid day, SheriAnne picked me up and we went to see how Jeff was doing. He had just been taken in to have an Echocardiogram, and an Angiogram. After several excruciating hours, they came out and told us that he had 2 arterial blockages, but not so badly blocked  to require a stent. He would go on medication and need to follow up with a Cardiologist when we got home. WHEW! They released him at 7pm, with instructions to rest for a few days and follow whatever the Cardiologist prescribed. 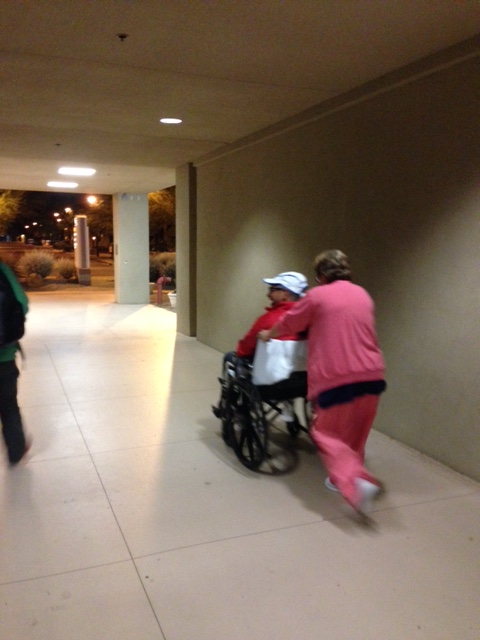 We had separate flights but both were home safe and sound by 6pm. We were exhausted, cold, and needed to decompress significantly. Jeff was sore from the wrist to the shoulder, due to the Angiogram, and that lasted 2 days. He is waiting to find a Cardiologist that will accept him as a patient.

The lesson here is, once again, it doesn’t matter who you are, how healthy a lifestyle you live, you are still at risk for illness. We don’t exactly know whether Jeff had a real heart attack or not. What we do know is that he did have subtle symptoms in the past few months. Some shortness of breath. (“Of course I’m winded, I’m running uphill.”) Some unexplained coughing at night (“It’s just a left over cough from my cold.”) Some stiffness in the neck (“Body aches are part of my Cancer medicine side effects.”) Some dizziness (“Again, I’m working out hard! I’m Ironman training.”) Simple, subtle symptoms that most athletes have at one time or another. Even the doctors don’t give us stress tests, because they don’t work.

My advice is to be aware of ANY changes you experience in your health. No matter what your age, you can have latent issues just waiting to surface at any time. Please get regular check ups. Tell your doctor EVERYTHING, no matter how insignificant you think it might be.

I’ll be riding Jeff’s back until he has a follow up and a plan in place with a Cardiologist. I can be very persuasive.

Be healthy. Train smart. Have fun. Thanks for following my journey.

9 thoughts on “A Weekend in Phoenix (With a Health Scare)”